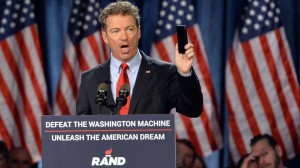 The post-9/11 decade has only really just begun, two years on from former National Security Agency contractor Edward Snowden’s revelations about the US government’s vast surveillance programme. And one of the only American politicians (with name recognition and some standing) who has had the courage to praise Mr Snowden’s actions is Rand Paul.

As Fareed Zakaria recently wrote, “Paul notes— correctly — that we would not even know of the existence of this system of metadata collection if not for Edward Snowden’s revelations, that the FBI has been unable to cite a single terrorist plot disrupted by it and that the special courts in place have few checks and little transparency.”

Quite so. As Mr Zakaria says, over and over, Mr Paul speaks truth to power – the power of an expanding national security state and American politicians’ easy disinclination to challenge people’s feverish panic about terrorism.

Not only was it Mr Paul who forced the lapsing – even if just for a few days – of the Patriot Act, which perforce enabled the US to appreciate that they stayed safe even without the vast surveillance network maintained by the NSA.

Mr Paul has also dared to ask about the death by drone of US citizen and Al Qaeda leader Anwar Al Awlaki, asking why Americans were not more worried about the fact that their president can now execute US citizens without trial.

He has been candid about the Middle East, reminding the US that its military interventions have destabilized countries and their “secular dictators”, thereby enabling the ideal conditions for radicals to flourish in Libya, Egypt, Iraq and Syria.

Words are great political tools, of course, but only if they’re being used by right-thinking men.