Unknown unknowns: Rumsfeld is still talking but what’s he saying? 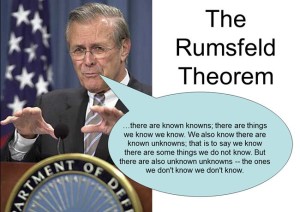 So last week, came a real unknown unknown, to use terminology made famous by George W. Bush’s defence secretary. Donald Rumsfeld appeared to have a heart and a conscience and, surprise, surprise, both were linked to his brain. For, The Times of London carried a piece with the headline: “Bush was wrong on Iraq, Rumsfeld says.” And it quoted him as follows: “I’m not one who thinks that our particular template of democracy is appropriate for other countries at every moment of their histories. . . The idea that we could fashion a democracy in Iraq seemed to me unrealistic. I was concerned about it when I first heard those words.”

This was simply amazing, coming from Mr Rumsfeld, a notoriously tough customer unable to squeeze out even the merest emotion for the “collateral damage” or civilian deaths of war.

But wait, not so fast.

Apparently, he didn’t really say it. Or didn’t really mean it. Or was a whole lot “more subtle” in the interview. That’s what he claimed to The Washington Post, as he grumbled about The Times’s headline and write-up.

One had to wonder hiw one had missed Mr Rumsfeld’s subtle side all these years, till Dan Zak pointed out in The Washington Post that he had none. “Rumsfeld, subtle?” he asked, “The man known for conducting his Pentagon briefings like a circus ringmaster, for walking a tight-rope of semantics, for wriggling free from tough questions like Houdini…”

He gave WaPo the full quote, which he had recorded. I offer it below. Basically, it’s exactly what The Times said. And it actually gets better.

“I’m for democracy, whatever that means.”

Donald Rumsfeld to The Times, London:

“I guess I’m kind of in the minority. I’m not one who thinks that our particular template of democracy is appropriate for other countries at every moment of their history, nor has it been appropriate for us at every moment of our history. We have evolved, we’re still evolving, and we’ll be different in 50 years. A hundred years ago, women didn’t vote. A hundred fifty years ago, we had slaves and so forth. So, the idea that we could fashion a democracy in Iraq, it seemed to me, is unrealistic to a certain extent, and the President and the administration would have been better off not allowing the mission to creep that direction. I was concerned about it when I first heard the beginnings of those words. I’m for democracy, whatever that means, but it means different things at different times and different places. And I have a healthy respect for what we’re not capable of doing, and that’s nation-building, and I think that a different country with different neighbors and a different culture… culture is so important… ought to be different, and there’s nothing wrong with that. That’s probably a good thing for the world if people are different and have different approaches. You say what might you have done differently? I personally think that Allawi would have been a whale of a lot different than Maliki. Well, why? Because he was a Shia, but he was Ba’athist. He was tough. They tried to kill him; Saddam tried to kill him. I think he had a clearer understanding that for that country to hold together, you have got to be respectful of the Kurds and the Shia and the Sunnis, all, and not think that you can run off with the football. So, always, you would do things differently, and I was unhappy when I saw things migrating over to that direction.”