Bitcoin’s surging price on account of Greeks fleeing control (and order) is both an advertisement and a warning.

For, the decentralized digital currency is in the enviable but slightly dodgy position of being the last resort for Greeks to circumvent capital controls.

It’s fine if you’re Greek and your country is edging ever closer to an international loan repayment deadline, which you can’t pay because you’re broke. In the event of a default, if you’re Greek, you want to make sure that your money retains the value it had when you parked it in the bank. So what do you do? As became clear on June 15, you watch the television news reporting the collapse of talks between Alexis Tsipras’s government and the European Union and you promptly withdraw money from your (Greek) bank account. (Reuters reported on June 15, that Greek savers had taken out around €400m on that one day. Two months ago, Greek banks lost €4.9bn of deposits.)

It’s fair to assume that a chunk of that money has gone into Bitcoin. 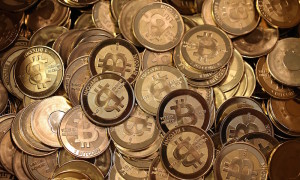 In a sense, it’s becoming the anti-Establishment destination of choice, a home for  Six years after its release (and eight years after the mysterious Satoshi Nakamoto is supposed to have begun working on the Bitcoin concept), the digital currency has become the choice tool for those who want to stay below the radar and still play in the global economy. The sex industry is starting to include Bitcoin as a payment option – it’s particularly good if you’re a cheating husband – and it also ensures complete discretion for various other kinds of nefarious activity, such as drug dealing and human trafficking.

But the lack of a money trail – it scatters information across the web, rendering all transactions effectively opaque – is both good and bad.

You can hide but then so can someone who’s promised to pay you.