Syria needs a museum in exile … and quickly 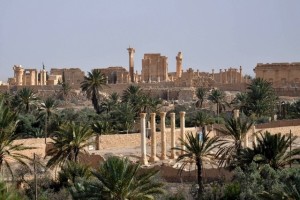 Those who fear a cultural disaster in Syria because of the landmines that ISIL is said to have laid around Palmyra’s ancient ruins, should take some comfort in the extremist group’s avarice. Its iconoclasm admittedly led it to sledgehammer the lamassu sculptures in Mosul museum, but ISIL seems too savvy to adopt a mass destruction strategy, even if reports yesterday suggest it destroyed two ancient shrines close to Palmyra.

Despite its barbarity, ISIL has more business acumen than the Taliban. Its complex asset management strategy recognises the true worth of antique objects of unique value. Unlike the Taliban, who simply blew up the two massive 6th century Bamiyan Buddhas hewn into the sandstone cliffs of central Afghanistan, ISIL is heavily invested in antiquities trafficking. Generally, it levies a 20 per cent tax on sales of cultural booty by all the petty smugglers, tomb raiders and small time crooks who hawk early Christian icons, wall mosaics, Bronze Age votive busts, Roman vases and whatever other artefacts they find in ISIL-controlled territory. We know this because archaeologists participating in the US government-funded American Schools of Oriental Research project are documenting the threats to Syria and Iraq’s cultural heritage by means of satellite imagery. Michael Danti, who’s leading the project, says there is “industrial-scale looting” underway all over Syria. Amr Al Azm, another archaeologist in the US, discerns a change in the antiquities “sales tax” ISIL levies. It has evolved, he says, into a more profitable approach that includes employing contractors to excavate cultural treasures.

Note the words these archaeologists use. Looting. Excavating. Not wholesale destruction. Or dynamiting as happened with the Bamiyan Buddhas. Obviously, this is terrible in terms of archaeological context. But if there is any good that could be said to come of ISIL’s trade in antiquities, it is that at least some of the great cultural treasures of this region, and indeed of humankind as a whole, are saved. It does not bring back the section of the 3,000-year-old city wall at Nineveh, which was destroyed this year by the militants. But at least some coins, statuettes, jewellery and coffee pots are preserved for another day if only because they were sold on.

This is not to commend racketeering and the black market in a country’s cultural patrimony. It is just to recognise the dismal truth: there may be no other way to preserve fragments of Iraq and Syria’s heritage in the continuing chaos of conflict.

In a sense, it is a little like the trade in cultural relics after China’s “cultural revolution” in the 1960s and 1970s, which aimed to destroy the “four olds” – customs, culture, habits and ideas. This meant a cultural purge. Scrolls were burnt, paintings torn, murals defaced and priceless antiquities shattered. But below the radar, the Red Guards appropriated some of what they could sell and those items subsequently appeared on the black market in China or in Hong Kong. The bottom line is they were preserved.

It was the same for Cambodia. In the late 1980s and early 1990s, two monumental statues (or parts of them) arrived in the US from Cambodia, which was struggling to recover from civil war. Known as the Kneeling Attendants, for two decades they guarded the entrance to the south-east Asian galleries of the Metropolitan Museum of Art in New York city. The Met bought them, presumably in good faith. But when Cambodia eventually sought to reclaim this looted bit of its heritage, the Met returned the statues in 2013. It was a case, as the American Bar Association reported, of museums developing not quite a conscience, but an acute appreciation of the bad publicity that comes with being seen to capitalise on the ill fortune of other countries.

ISIL appears reliant on its income from racketeering, which may be second only to the revenue it derives from oil sales. In the US alone in 2013, official data showed a 134 per cent rise in the value of declared antiques imported from Syria. The market is booming and ISIL is satisfying the demand. But as with the Cambodian statues, some of those looted objects may end up in museums and eventually returned to their country of origin when the time is right.

But should governments around the world really try to choke the trade in order that not one artefact gets out of ISIL territory? They couldn’t do that anyway, for all that the UN banned the trade in antiquities from Syria in February (trade from Iraq was banned a decade ago) and the US and European governments are considering ever-tighter anti-smuggling legislation. But might there be a short-term argument for getting what one can out of ISIL’s grip?

There is another way too, though it applies only to areas not yet overrun by ISIMove the relics you can, as quickly as possible, to safety.

There is precedent. In the many decades of war suffered by Afghanistan, the Kabul Museum moved its priceless contents from its display cases to a private house to multiple ministries to a centrally located hotel. But with the imminent arrival in the capital of the Taliban, the museum finally decided to ask the Guimet Museum in Paris to take temporary charge of several pieces. They left Afghanistan and while everyone waited for the situation to stabilise, an Afghan Museum in Exile was set up at the Swiss Afghanistan Institute in Bubendorf with the help of Unesco. In 2007, the collection returned to Kabul.

Syria’s artefacts don’t necessarily have to head westward. But a Syria Museum in Exile needs to be established somewhere, soonest. And never mind, at least for the moment, any pieces of dodgy provenance.