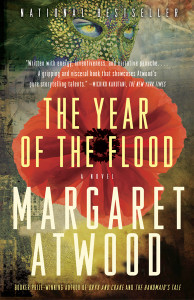 It was a bit of a coincidence to hear Gardiner Harris on the radio while I read the following line from Margaret Atwood’s novel ‘The Year of the Flood’: “The air was better than it was in the middle of the city so you didn’t have to wear nose cones so much”.

Coincidence because Mr Harris, formerly The New York Times correspondent in Delhi, has been very critical of the air quality of the Indian capital. On BBC World Service radio the other day, he said he will forever blame himself for taking his family to India with the result that his young son developed asthma.

Ms Atwood’s novel is part of a trilogy (‘Oryx and Crake’ and ‘MaddAddam’) that imagines a planet that has been practically destroyed by human ingenuity and meddling. The air quality is so bad that out on the streets, people are best off wearing nose cones.

The same for Delhi. Mr Harris would probably agree whole-heartedly. He says (and has written about it too) that the world pays a lot more attention to pollution in China but not so much to India, where the situation is much worse and a great deal less is being done.

He’s right about that. There are indeed, some hopeful signs that the Chinese are trying to clean up their act with their customary efficiency. In India, conversely, there is occasional sloganeering, rhetoric, symbolic action and then …nothing.

As Mr Harris pointed out in a NYT blog in January 2014, though the government in Delhi is said to have provided detailed air quality data to the public for some time, some of it is unreliable, with long gaps and sometimes sudden and inexplicable spikes. I would trust Mr Harris on this for many reasons. Not just because he works for an authoritative newspaper and is emotionally invested in the issue of Delhi’s air quality because of the unfortunate consequences for his family but because he used to be a public health reporter for the NYT. When he lived and worked in a rather unluckily named town (Hazard) in Kentucky, his reporting is said to have resulted in “broad changes in laws governing coal-mine safety and black-lung compensation”. That’s what his publishers say, anyway.

The nose cone sector is probably likely to be a sunshine sector for Delhi.