Hulu streams ‘Seinfeld’ to the world but which bits speak Noo Yawk? 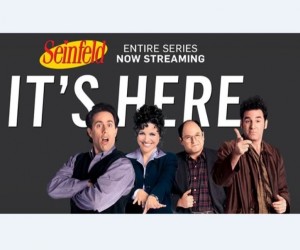 Now that ‘Seinfeld’ has finally arrived at a streaming service (on Hulu not Netflix), spare a thought for those whose job it is to prepare the hit American sitcom for foreign audiences.

That means anyone who’s not a New Yorker really, because getting ‘Seinfeld’ is not about whether or not you speak English. Do you speak “Noo Yawk”?

Anyone who’s not a New Yorker and consequently doesn’t understand New York residents’ unique eco-system and preoccupations (as is the case with any city) will find it hard to get the joke in ‘Seinfeld’.

As a wonderful piece in ‘The Verge’ says, “at its core, ‘Seinfeld’ was, as the series famously dubbed itself, ‘a show about nothing’: four self-centered New Yorkers making a dramatic showing of dealing with minor daily irritations and social faux pas”. It goes on to point out that the show “so often relied on word-based humor, American customs, and Jewish reference” that those outside the New York mindset were likely to be left wondering if they were supposed to laugh at any given point. (Say, the reference to concentration camps).

This is true enough and probably why I was never a big fan.

Unlike ‘Friends’, which had more of a universal story and fairly anodyne plot that may weave in and out of fairly predictable situations, Seinfeld was more about words and how they’re perceived. And what they mean when they’re said by a Jewish New Yorker.

‘The Verge’ describes the trouble that came with the German translation of all 180 half-hour ‘Seinfeld’ episodes. And it was about more than the concentration camp references. Sabine Sebastian was given the job of doing the translation and one of her biggest problems became the name of one of Jerry’s girlfriends, Dolores. In the show, he doesn’t know her name (not having asked her when they met) and only has this enormous (if slightly abstruse) clue: she said she’d been teased for her name as a child because “what do you expect when you

r name rhymes with a part of the female anatomy?” (Dolores rhymes with clitoris, Jerry realises much much later, when it’s too late and she’s left him).

Anyway, a lot of the show is devoted to the guys trying to puzzle out the woman’s name. Could it be Aretha (urethra); Bovary (ovary); Mulva (vulva)?

For the German translation, Ms Sebastian had a huge problem. How to find a woman’s name that rhymed with a German word for a body part? Apparently, she substituted “Dolores” with Uschi, which is a fairly common German abbreviation of Ursula and rhymes with “muschi,” slang for vagina.

But this little bit of translation genuis never really ensured gold for ‘Seinfeld’ in the premier league of internationally loved TV shows. It spoke a different language even if it was in English.