The drama over ‘Greecisms’ in every twist of the neverending story 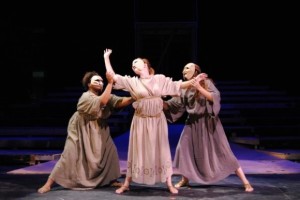 The next instalment of the Greek drama is due for July 20. That’s when Greece is scheduled to repay the ECB €3.5 billion. Defaulting on its IMF debt on June 30 was serious but July 20 is the big date – defaulting on the ECB would mean an almost certain exit from the euro area.

But that is not the purpose of this blog. Note the word “drama” in the first sentence. Stories about Greece (and there have been a lot of them of late) mean that at least some (or all) of the following words and phrases will predictably make an appearance somewhere in the copy:

Sometimes, they add the words

Why? Well obviously there are remarkable (dramatic, epic…) twists and turns of this story – Greece living beyond its means, going broke, refusing to cut back, worn down by austerity and out of its mind with woe. But for hacks, there’s the delicious chance of finding some resonance between contemporary events and something that started in ancient Greece.

Tragedy and comedy emerged from Athens as dramatic genres and they were exported as far and wide as possible to build soft power.

Thespian, theatre …so many dramatic terms come from Greece.

That said, it does get rather repetitive to hear “Greecisms” in every piece. Consider Megan McArdle on Bloomberg View. She just couldn’t resist ending her Tuesday piece on Greece’s situation with the words: “we’re in for a lot of drama.”

The Economist, which is generally less clichéd (and certainly well judged in its use of clichés) began its June 30 story on Prime Minister Alexis Tsipras’s headaches as follows: “By any reckoning today is a crucial moment in the extraordinary Greek debt-crisis drama”.

Drama is probably the most overused “Greecism” of them all.

The one exception appears to be Nobel Prize-winning economist Joseph Stiglitz, but instead of “Greecisms” he is full of prescriptions for the Greeks. One has to wonder which is worse.