Computer says…the robot journalist could get to Pulitzer status. Really? 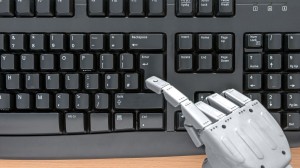 In Chicago, they’ve got computers that are being taught how to file copy. Journalist’s copy. Oh, it’s just basic sports reports and business stories so far, but the faux journalist’s creator Kris Hammond says it’s only a matter of time.

Anyway, The Guardian’s Tim Adams writes that Mr Hammond “half-suggests that it probably won’t be that long before (computers) can bash out 2,500-word stories on innovations in machine learning for the Observer New Review”.

Well he would say that wouldn’t he. Mr Hammond is co-founder and chief scientist of a company called Narrative Science and this is what it does. It humanizes the machine. It takes away my job. Or at least those of many of the young journalists entering the profession to cut their teeth writing sports reports and business snippets.

AP already has so-called “robot reporters” and they’re supplied by a company that’s like Narrative Science.

How it’s done sounds pretty amazing. Narrative Science has a programme, called Quill, which has united advances in pattern recognition software with the revolution in natural language generation to create algorithms that resemble a writer. (Mr Hammond even told The Guardian that a computer would win the Pulitzer in 2020 but he might just have been winding him up.)

He also says that 90 per cent of journalism will be written by computer by 2030. It’s not great journalism (some would say there’s very little great journalism anyway and , so what’s the difference). But that machine in Chicago can, for example, write this on a baseball game:

“Tuesday was a great day for W Roberts, as the junior pitcher threw a perfect game to carry Virginia to a 2-0 victory over George Washington at Davenport Field.

“Twenty-seven Colonials came to the plate and the Virginia pitcher vanquished them all, pitching a perfect game. He struck out 10 batters while recording his momentous feat.

“Tom Gately came up short on the rubber for the Colonials, recording a loss. He went three innings, walked two, struck out one and allowed two runs. The Cavaliers went up for good in the fourth, scoring two runs on a fielder’s choice and a balk.”

Apparently, other equally smart computers can do business stories like this:

“The Cupertino, California-based company said it had profit of $3.06 per share.

This is pretty amazing but I would think that a human would still be needed to make sure the computers had the right story schedule and suchlike – or, in that classic journalism class example, if a scheduled event didn’t happen because of unforeseen circumstances.