An Eid story with a difference: Germany’s headhunter for refugees 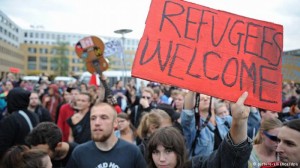 Michael Strucken is his name and he lives and works in Cologne. According to OZY, he’s “Germany’s first talent scout for refugees.” That’s all those thousands of skilled people who have been forced out of their countries by conflict, but who have much to contribute in their new home if only they could. Nearly 10 per cent of Mr Strucken’s clients are experienced doctors. There are engineers and others. The chance of giving them work they are trained to do is almost a public service if it didn’t make complete economic and psychological sense.

Mr Strucken has been hired to do just that. He is supposed to help refugees get job training, get employed, earn money and re-build their lives in Germany. In their first 15 months in the country, they are only allowed to apply for jobs that don’t have suitable German or European Union candidates.

Extrapolating from the number of refugees arriving in Germany each year (a fairly steady 300,000 for the past 25 years), skilled refugees could add about 15,000 people to the German workforce every year. That’s if just 1 in 20 refugees were qualified to take the available jobs.

The German state of North Rhine-Westphalia is keen on using skilled refugees to plug employment gaps and is apparently launching pilot projects with talent scouts like Mr Strucken in three locations.

It’s a remarkably progressive way of addressing the issue of refugees in Europe. They are there anyway. Make them feel needed; put them where they’re needed. Everyone wins.

Germany really is a market leader in such innovative new thinking.