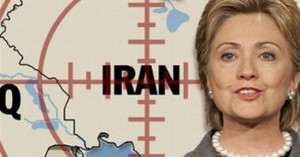 The day the Iran deal happened, Ms Clinton, front-runner to win the Democratic party’s nomination for the presidential election, appeared at the Capitol and said the following: that she supported the broad outlines of the agreement but Iran must be challenged pretty sharp-ish for its other activities in the Middle East and elsewhere.

Here are her words:

“Having been part of building the coalition that brought us to the point of this agreement, I think we will have to immediately, upon completion of this agreement and its rigorous enforcement, look to see how we build a coalition to try to prevent and undermine Iran’s bad behaviors in other arenas,” she said.

And here’s what her spokesman said: “Everybody lives somewhere between support and opposition.”

Where would that be? Straddling the fence.