Thank god the Buharimeter is nothing like wearable tech for politicians 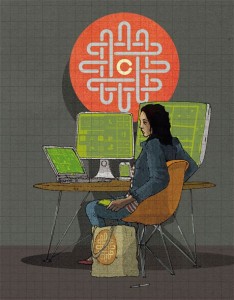 The after-arguments of the Buharimeter – a website that tracks the Nigerian president’s performance on each of his campaign promises  – makes me think of ‘The Circle’. In Dave Eggers’ frightening futuristic novel, politicians and others eventually start to wear so-called ‘SeeChange’ cameras manufactured by the powerful technology company The Circle.

It is supposed to be a revolution that’s described as “going transparent”. Basically this means, everyone everywhere can see everything that you see and do at all times.

The philosophy is described by the book’s main protagonist Mae Holland as follows:

After the Buharimeter got going, many are wondering why use a “retro” tracker on an elected politician. Why not compel them to be in hock to a wearable?

Considering all the health and fitness trackers (Fitbit, Jawbone, Misfit etc) why not an ankle bracelet that records thoughts and deeds on government policy, papers signed, deals done?

All I can say is that there will be a lot of time spent in the bathroom where even The Circle’s SeeChange cameras aren’t meant to follow.