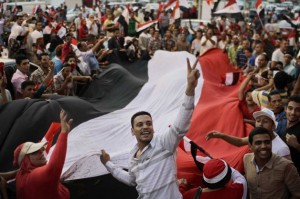 We zipped through Tahrir Square at 5 o’clock on Friday morning (August 7) on our way to the airport and the Suez 2.0 party seemed to have continued all night.

The square was still solid with people – not women anymore, mainly young men – and the ground was littered with plastic bottles and paper bags, the detritus of a good party.

The national hangover is all about highs not headaches.

President El Sisi’s people are drunk on the possibilities of the future. They may not have been reading the runes carefully but they’re investing their hopes and dreams in the strongman.

So what’s been going right for Egypt? Quite a bit actually:

–       Egypt’s stockmarket delivered the best returns for investors in 2014, its index rising nearly 30 per cent in dollar terms

–       Unemployment is falling though it is still high, at roughly 13 per cent