What does a poet do with history? They parse it so it’s no longer a souvenir 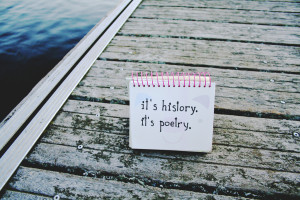 Last week, it was that time of year again – when Indians and Pakistanis recall W. H. Auden’s 26-line poem on the partition of India, written with the clarity of hindsight nearly two decades after the sub-continent was divided up.

It would be in the great tradition of poems that recreated history: Yeats’s ‘Easter 1916’, H.W. Longfellow’s ‘Paul Reveres Ride’, Byron’s ‘The eve of Waterloo’.

What does a poet do with history? He or she parses it. As Martin Espada, the lawyer who eventually became a professor of poetry at the University of Massachusetts Amherst once explained it, a poet can take events in the life of a country and explain them in a way that goes beyond “souvenir history”.

Professor Espada, who has written historical poems about Puerto Rico (his father was a leader in the Puerto Rican community and the civil rights movement) says that there was a great “need” for them:

“My sense of the educational system of this country — having been through it myself and also having taught in that system — is that it has in general no sense of history beyond ‘souvenir history’, the kind of history that is commemorated every Fourth of July. A very superficial understanding of history. And that furthermore, there is no sense of the history of Puerto Rico whatsoever — which is not a coincidence. Any time a country is a colony of another … you can expect that the history of that people will be conveniently forgotten at best, and suppressed at worst. So that is the context in which I operate. But beyond that … there’s also the fact that I really believe that the best stories come out of history. Either the history of … great events, great people, or the history of one’s own community, one’s own family.”

What follows is the whole of Auden’s ‘Partition’ and the first para each of ‘Easter 1916’, ‘Paul Reveres Ride’ and ‘The Eve of Waterloo’.

Unbiased at least he was when he arrived on his mission,
Having never set eyes on this land he was called to partition
Between two peoples fanatically at odds,
With their different diets and incompatible gods.
‘Time,’ they had briefed him in London, ‘is short. It’s too late
For mutual reconciliation or rational debate:
The only solution now lies in separation.
The Viceroy thinks, as you will see from his letter,
That the less you are seen in his company the better,
So we’ve arranged to provide you with other accommodation.
We can give you four judges, two Moslem and two Hindu,
To consult with, but the final decision must rest with you.’

Shut up in a lonely mansion, with police night and day
Patrolling the gardens to keep assassins away,
He got down to work, to the task of settling the fate
Of millions. The maps at his disposal were out of date
And the Census Returns almost certainly incorrect,
But there was no time to check them, no time to inspect
Contested areas. The weather was frightfully hot,
And a bout of dysentery kept him constantly on the trot,
But in seven weeks it was done, the frontiers decided,
A continent for better or worse divided.

The next day he sailed for England, where he quickly forgot
The case, as a good lawyer must. Return he would not,
Afraid, as he told his Club, that he might get shot.

I have met them at close of day
Coming with vivid faces
From counter or desk among grey
Eighteenth-century houses.
I have passed with a nod of the head
Or polite meaningless words,
Or have lingered awhile and said
Polite meaningless words,
And thought before I had done
Of a mocking tale or a gibe
To please a companion
Around the fire at the club,
Being certain that they and I
But lived where motley is worn:
All changed, changed utterly:
A terrible beauty is born.

Listen, my children, and you shall hear

Of the midnight ride of Paul Revere,

On the eighteenth of April, in Seventy-Five:  Hardly a man is now alive

Who remembers that famous day and year.

‘The eve of Waterloo’

There was a sound of revelry by night,

And Belgium’s capital had gathered then

Her beauty and her chivalry, and bright

A thousand hearts beat happily; and when

Music arose with its voluptuous swell,

And all went merry as a marriage bell;

But hush! hark! a deep sound strikes like a rising knell!