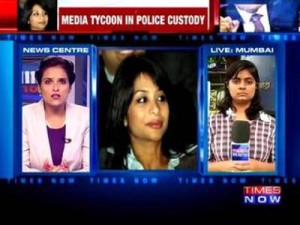 A sensational murder case has India fascinated and there are hours of breathless television coverage and acres of print devoted to the accused. This is hardly unusual – real-life crime stories with glamorous characters and whispers of sexual misconduct are always riveting – except for the way the Indian media has been behaving.

The accused, a socialite high-flyer currently married to her alleged third husband, is being openly described as a femme fatale, a social climber, a debauched woman and a bad mother. The unbridled sexism, unrestrained prurience and utter lack of concern about defamation, libel or indeed, prejudicing the course of justice, says three unfortunate things about India. These are as follows: India’s media, like its economy, is vibrant but undisciplined. Both were inadequately reformed after liberalisation in the 1990s. And both alternately struggle with over and under-regulation.

This state of affairs should be of concern with new figures this week showing that India and China now share top billing as the fastest growing major economies in the world. Between April and June, India’s GDP grew by seven per cent. This matched China’s rate for the same period and was only a slight dilution of India’s 7.5 per cent showing from the previous quarter. Those statistics and Beijing’s slew of recent troubles – stock market interventions, devaluation and waning economic indicators – have prompted investors to look anew at India as the next driver of global growth. But its new attractiveness seems more to do with bad news from China. So, can it manage it?

Not in the way of China. India’s economy is only one-fifth the size. More to the point, India’s economy is beset by many of the same problems as its media, which is why neither can honestly be called worldbeaters. Both have often been seen as sectors with great potential for growth, but only if they were to be imaginatively reformed, subject to properly enforced regulation and given their head.

That’s a huge task. The prospects for positive change are slightly better for the economy than for the media, which is a vast, multilingual and unruly sector that includes at least 12,000 newspapers and nearly 800 licensed satellite TV stations, as well as the state-owned Doordarshan television and All India Radio.

As has been sickeningly obvious in the continuing murder coverage, news in India is routinely reduced to tabloid or talk show fodder, without proper explanation of context, careful scrutiny of the facts, considered analysis or constructive debate. Pranoy Roy, an economist by training but better known for founding a TV company and anchoring India’s first news telecast by a private TV channel in 1995, calls it the “tabloidisation of news”.

He points out that some leading outlets offer a predominantly unwholesome mix of astrology “news”, graphic crime and celebrity tittle-tattle. This tabloidisation, which really only properly began after India decided to open up its economy in 1991, has obvious implications for the quality of journalism and the way a whole generation has learnt to think and behave. But it has deeper ramifications too, not least in the country’s inability to properly examine, with appropriate context and credible facts, some of its biggest problems, the ones that have consistently held it back.

For instance, there is the troubled relationship with Pakistan and one of its chief consequences – engorged levels of military spending that a country with 400 million desperately poor people can ill afford. The the question why 75,000 highly educated people (engineers, for instance) should be so desperate for paid work that they recently applied for 30 entry-level government posts.

The Indian economy scores slightly better than the media sector in one key respect. At least it has aspirations to greatness and there are some foreign investors who seem willing to take a chance on it.

Taiwanese iPhone-maker Foxconn has just announced a $5 billion (Dh18bn) investment and General Motors a $1 billion plant expansion. Junior finance minister Jayant Sinha promptly declared that this “is India’s moment”, conveniently ignoring the fact that his boss, prime minister Narendra Modi, has limited his ambitious reform agenda to soaring rhetoric in the past 15 months.

The government has been unable to push through a key bill that would promote infrastructure and development by making it easier to acquire land from landowners.

The uniform goods-and-services tax promised by April looks likely to be delayed. There’s been little movement on far-reaching plans to simplify the tax laws, lower corporation tax and privatise state companies. The millions of manufacturing jobs that were supposed to have been generated by Mr Modi’s trendily titled “Make in India” campaign remain a wistful idea. Wednesday’s nationwide strike by the unions against the prime minister’s economic policies, affecting industries from coal mining to transport, further challenges Mr Modi’s bold proposals to reform labour laws.

Even so, for reasons that have little to do with any fundamental change in the reality of India, there is a decided surge of enthusiasm about its prospects.

This is mostly because of three negatives – it is not an export-orientated economy, a manufacturing powerhouse or a commodities exporter. This means it is not at risk from China’s slowing growth because China is not its biggest customer. And as a net energy importer, it stands to benefit substantially from the falling oil and coal prices that have followed the steep drop in Chinese demand.

This then, really may be India’s moment to grow but only the foolhardy would read a lucky coincidence of external events as a reason to postpone reform yet again.