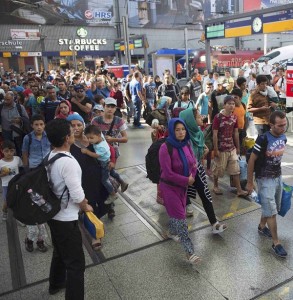 Unfortunately, the new attempts to hit ISIL hard risk becoming a little like that. They will be mainly symbolic. They will seek to persuade doubters that something significant is under way. And they will add to the general babble over how to fight the extremist group while not bolstering Bashar Al Assad, something that is practically impossible unless the air strikes are so ineffectual as to not matter at all.

What is their purpose then? To quiet Europe’s mounting worry over the inexorable flow of migrants from Syria, which is now the leading source of desperate people seeking sanctuary.

Consider the timing. The unceasing influx of refugees is profoundly polarising but it has taken on an inexorable momentum all its own. Television channels across Europe are filled with constant updates on the flow, German corporate bosses, celebrities and football teams have been pledging support and the Pope has urged every parish to open its heart and homes.

Syrians on the move are full of praise for German chancellor Angela Merkel, with one, Mohammed Hadad, gratefully telling the Financial Times she was now “the mother” of his people. Even though such extravagant gratitude provokes right-wing rage, Mrs Merkel has graciously acknowledged the halo of hope that encircles her country right now. Meanwhile, politicians on the nationalist right warn that European cultural values will be submerged by the “flood”.

Xenophobic or not, they are right on at least one point – generosity is a finite resource. As is a country’s budget, territory and the patience required​if and when the social fabric is stretched tight as a drum skin. This is where the air strikes against ISIL come in. They are supposed to tackle the refugee problem “at source”, as a leading British politician put it.

So on Monday, even as France and Germany agreed to take nearly half of the extra 120,000 refugees that the European Union proposes to relocate over the next two years, the French president announced the need for other measures as well. Francois Hollande said that he felt a responsibility to fight “terrorism and war” and that in order to cope with the flow of refugees, France had to consider air strikes against ISIL in Syria.

It was a variation of something Britain’s chancellor had said just days before. “You’ve got to deal with the [migration] problem at source, which is this evil Assad regime and the ISIL terrorists,” George Osborne told a finance ministers’ summit in Turkey.

But there is little sign of a coherent policy – or will – to tackle both problems and in the short term, western leaders seem to think it less controversial to mutter imprecations against just ISIL. Less controversial, but not easier. ISIL continues to make advances and is now said to have captured Jazal, the last major oilfield under Syrian government control.

But the attempt to talk tough continues. Mr Osborne’s statement simply amplified that of Australia’s foreign minister from the week before. Even as Julie Bishop signalled she would accede to an American request to extend its air force attacks on ISIL from Iraq into Syria, she suggested that Europe should do the same if it were not to be engulfed by the refugee crisis.

The British prime minister seems to agree, which is why he is trying to organise a parliamentary vote that would authorise military strikes in Syria. Domestic political reasons may prevent him getting the result he wants. But this week’s disclosure of an unprecedented UK government-approved drone strike in Syria, which killed two Britons, is being seen as a way to sneakily make the case for greater military involvement in hitting ISIL.

The emerging consensus is apparent – there is a need to be seen to be doing something concrete in Syria.

There is a common-sense aspect to extending the air campaign to Syria. ISIL operates as though there were no border at all between Iraq and Syria and any anti-ISIL mission should be able to do the same.

Fair enough. But how will this prevent the haemorrhaging of civilians? It won’t, not as long as Mr Al Assad’s forces continue to indiscriminately bomb and shell his people. Not only has the international community refused to conduct the kinds of military operations required by the Responsibility to Protect principle enshrined in the first article of the Genocide Convention, the UN has also repeatedly failed to authorise collective military action to restore international peace and security in response to ISIL’s seizure of territory across Iraq and Syria. Clearly then the air strikes’ utility may lie only in conveying the illusion of a considered and forceful strategy to tackle the migrant crisis at both ends – the source and the end point.

The trouble with faux activity, though, is that it uselessly consumes resources and feeds a sense of hopelessness when the means fail to achieve the declared aims.