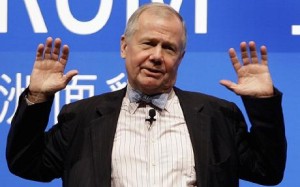 As Indian Prime Minister Narendra Modi heads for a heart-to-heart with Mark Zuckerberg, what about those other signals to business? What about Jim Rogers, the American businessman who’s been betting (heavily) on Asia, but now no longer has any particular interest in what India does?

A little while ago, he sold his holdings in Indian companies, saying with cutting emphasis as he closed the door on India, that he felt let down as an investor. Especially as he had bet on the Indian prime minister Narendra Modi.

“Modi had the largest mandate in modern history—no recent politician had what he got. But if he can’t implement reforms, then who can? Is anything ever going to be done?” Mr Rogers recently told ‘Mint’ newspaper.

He went on to comment on Mr Modi’s soaring rhetoric and snappy soundbites: “I am sure Modi is a smart guy, he enjoys good press, and he makes a lot of friends for India. But I, as an investor, after almost a year-and-a-half, have decided to move on to other places, partly also because stock markets are not going to be particularly good for the next year or two”.

Mr Rogers’ views are bad for India’s hope that it will be the very Taj Mahal of business opportunity, one of the wonders of the new world order, a magnet for foreign investors.

He has form, as they say.

The Quantum fund he co-founded with George Soros is considered legendary. During the 10 years he helped manage it (1973 to 1983) it gained 4,200 per cent. The S&P 500 rose just 47 per cent in the same period. Mr Rogers promptly “retired” after that happy streak of good fortune. But he has not stopped investing for profit and memorably described himself to The Sunday Times, London four years ago as “not a spender. I don’t have anything I want to spend money on. I’ve rarely owned a car and I’ve never owned more than one house at a time.”

Clearly, Mr Rogers has the sort of innate prudence my grandfather would’ve advised.

And he’s saying it’s best to get out of India?

Dear me. This is no way for Mr Modi to be making friends and influencing people. Or, more crucially, building business confidence in India.