Here’s the news about Hillary Clinton.

Hillary Clinton is stuck in a so-called “poll-deflating feedback loop”.

According to David Weigel of The Washington Post, voters are hearing about only three types of Clinton stories, all of them with negative implications for her.

First, stories about the scandal surrounding the private email server she used as secretary of state.

Third, stories about vice president Joe Biden’s ruminations about entering the race to be the Democratic Parrty’s nominee for president.

These waves of bad-news stories are affecting the way voters, the media and the world view Mrs Clinton’s prospects.

What that cancels out is some truly heartwarming aspects about Hillary, the woman, the mother.

For one, her daughter’s warm relationship with her. A few weeks ago, Chelsea Clinton’s letter to her powerful parents right after the devastating 2010 Haiti earthquake was made public. (Click here for the whole text or just the fragment I’ve given at the end of this post.)

Mainly, one feels massive regret for all that wasted work. If only Bill Clinton (as Special Envoy for Haiti and who was leading relief efforts) and Hillary (as Secretary of State) had listened to Chelsea’s warning  that international relief efforts in Haiti seemed to be heading for disaster. 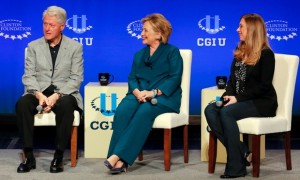 But what’s equally apparent is the genuine candour (and trust) that Chelsea felt towards her mother (and father, but that’s another story).

Here’s the context of Chelsea’s letter to Hillary (and Bill):

FRAGMENT OF CHELSEA CLINTON’S LETTER TO ‘DAD, MOM’ ON HAITI AFTER THE EARTHQUAKE

There is a context section at the bottom, which is longer than I would like, but I

limitations. To say I was profoundly disturbed by what I saw – and didn’t see –

would be an understatement. The incompetence is mind numbing. Not incidentally,

it rained twice while I was there. If we do not quickly change the organization,

management, accountability and delivery paradigm on the ground, we could quite

typhoid and other water-related diseases in the near future. Below are my major

near and longer term. As is often said, if I had more time – and less emotion – I

would have written a shorter letter. I hope this mini-behemoth is not rife with

grammatical errors or inadvertent gaps; I am sorry if either true.

first – happy to be an invisible soldier. Mainly hope this is even marginally helpful.