Rushdie’s familiar new Scheherazade moment: the story vs its subduer 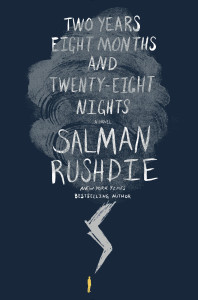 Does Sir Salman wish he were half-jinn? Is Two Years Eight Months and Twenty-Eight Nights the autobiography he might have wanted? Here’s how one American reviewer described it:

The prolific union (of a real-life philosopher of 12th-century Arab Spain, Ibn Rushd and Dunia, a princess of the jinn) ”produces a line of half-human, half-jinn offspring — the ‘Rushdi’, as the author can’t help calling them — whose descendants, centuries later, form the nucleus of an army marshalled by Dunia in a war between herself and a quartet of dark jinn bent on subduing humanity.”

Good god. The war between good and evil, between the story and the subduer. Familiar Rushdie themes.

Salman Rushdie himself calls it his funniest book ever. It might be. Take Jimmy Kapoor, one of those half-jinns. He’s a comic-book artist and when Dunia appears to reveal his ancestry, he says: “It isn’t bad enough being a brown dude in America, you’re telling me I’m half …goblin as well.” There’s also a baby who can identify corruption at City Hall.

The critics will inevitably judge the new Rushdie against the old, the Prize-winning canon. As with Toni Morrison, Philip Roth, Orhan Pamuk.

It might be better to see it as a story. And if it works.