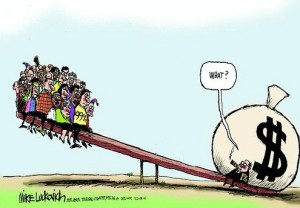 On Friday, a grand gathering of world leaders (also called the UN general assembly) formally adopted 17 new development goals. We’ll be hearing a lot about them for the next 15 years – they’ll be quoted ad nauseum as they serve, it’s hoped, as guiding first principles for political policy worldwide.

So far so good. Just don’t expect the world to become more equal as a result.

Consider this. According to most indicators, the world is actually becoming more inequal even though we are more focused on the issue. A recent study found that since 2000, the income of the poorest 40 per cent of people has fallen further behind the average.

Noah Feldman quotes finance researchers Marcin Kacperczyk, Jaromir Nosal, and Luminita Stevens’ rather doleful findings: the rich get richer because they know how to invest their money more effectively.

And educating a whole society may actually add to inequality because, as Mr Feldman puts it, “informational advantages build on each other – the more you know, the better you understand how to learn more.” That’s to say by educating the general populace about finance, you’d probably make for more inequality rather than correcting it.

Does this make sense?

Yes, just think about it. if you’re unsophisticated and uneducated you’re probably unlikely to understand the basics of growing one’s money and where to seek the relevant information. The rich (educated or not) will be abe to buy financial data that will help them earn high returns on their wealth and the difference in level will compound over time.

As Mr Feldman writes, “Basically, if you’re a better investor, your money will make more money. The effect is made worse because sophisticated investors are able to snap up valuable assets quickly, pricing the unsophisticated out of the market, or leaving them to pick up the scraps.”

Inevitably, income inequality will turn into wealth inequality and as French superstar economist Thomas Piketty discerned, the capital of the rich will keep turning into more capital.

What, if anything, can be done?

Mr Feldman offers some suggestions, none of which are likely to be enthusiastically embraced because they are seen to distort the economy:

*** a sovereign wealth fund to distribute the benefits of capital income more equally.

To me, that last one sounds a little like Jeremy Corbyn’s Quantitative Easing for the People, but then I’m neither an economist nor a super-investor.