The UN is perfectly pitched … and that’s a big problem 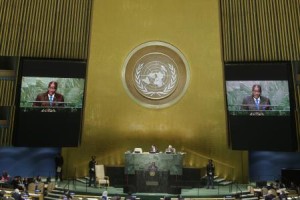 There are many reasons to ask if the United Nations – a multilateral body formed in 1946 – is relevant in 2015.

First, this is the season of UN-watching, when nearly 150 world leaders – the largest number ever – are meeting at headquarters in New York. Second, the pall of “collective failure” over Syria, as UN secretary general Ban Ki-moon put it not too long ago, continues to hang heavy over the organisation. Third, in 70 years, the UN has been reformed just once, a timid half-measure that merely added four non-permanent Security Council members to a rotating group that is by no means as powerful as the P5, the five countries that permanently have a veto on UN resolutions. Last but not least, the US, the most powerful nation on Earth, frequently fails to pay its UN membership fees, something that doesn’t seem like forgetfulness so much as disdain.

Even so, in many ways, the UN is a perfect representation of the world today with all its competing agendas, lobby groups, divisions and disagreements. There is American, Russian, Chinese and European dominance and the reluctance to surrender it, which roughly approximates to the real world order.

There is the chorus of the disaffected, with big emerging countries seeking great power status. Last week, India revived this aspirational Group of Four with Brazil, Germany and Japan. And then there is the Uniting for Consensus group, which is anything but and is merely a loose group of disparate, relatively minnow nations such as Italy, Spain, Argentina and Pakistan that basically opposes the anointment of “new centres of power” from among regional rivals.

As a snapshot of the way the world is, the UN is more or less representative. One might argue for more regional heavies with veto power, but widening the inner circle may not make UN decision-making any easier. Or any less partisan.

As it stands then, the UN is perfectly pitched. Or, as a senior official of the organisation once put it, it is a mirror image of the world and is both a stage and an actor. It is a stage on which the member-states play their parts, claiming their differences and their convergences, but it is also an actor in terms of global humanitarian aid and peacekeeping efforts, as agreed by its 193 members. In terms of distilling the global will to, in that overused phrase, create a better world, the UN is key to setting targets, even if it is just the higgledy-piggledy list of 17 new sustainable development goals adopted on Friday.

So what’s wrong with the UN? Consider its failures. It hasn’t been able to staunch the bleeding wound that is Syria, deliver the Palestinians from the daily injustice that is their lives and further back, stop (or even post-facto penalise) the outrageous invasion of Iraq. Add to that its inability to do anything manifestly useful and quickly, in Yemen and Libya, as well as the refugee crisis, and it’s clear that it is less about a grand new diplomatic design than sustaining the status quo.

There are two main problems with the UN though it is certainly not at the point of imminent demise in the way of its predecessor, the League of Nations. The League had been created with great hope at the end of the First World War, but in a final death rattle, it was ignominiously reduced to debating the standardisation of European railway gauges the day the Nazis marched into Poland and the Second World War began.

Not so the UN. It knows, and to its credit, publicly acknowledges, when, where and how it fails. In September, for instance, conscious of the UN’s glaring inability to address the haemorrhaging of Syria, France proposed doing away with the P5 veto in the case of “mass crimes”. Nothing changed, but it was at least, an open acknowledgement of the UN’s flaws.

These might be best summed up in a cliché – errors of commission and omission. There is the P5’s veto power, with all the inherent implications for what should be a cardinal concept, the sovereign equality of states. The P5’s engorged privilege is routinely reflected in other ways in the UN – citizens of P5 countries have more chance of getting executive positions in the secretariat. They even get to have more interns. Useful perks include permanent representation in UN bodies such as the Economic and Social Council and the International Court of Justice.

Equally invidious is the labyrinthine process of choosing the UN’s leader. It is mostly a secret, seriously deficient stitch-up, orientated towards finding a consensus candidate unlikely to inconvenience the P5. Even now, with the UN past retirement age, there are almost no established criteria for appointment of the secretary general and the Security Council makes its decision behind closed doors, sometimes even before the wider membership knows who might be in the running. This is undemocratic and contributes enormously to the sense of a body owned by the P5 establishment. A new secretary general will be elected next year and a more transparent process with real choices would probably have a huge effect on the way the UN is perceived by the wider world.

But will this be enough to give the UN new force and relevance? Probably not. But the nature of the organisation – and the project as a whole – is such that incremental reform may work better than a revolution.