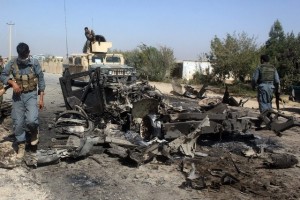 Accounts from Kunduz, a strategically important transport hub for northern Afghanistan, have oscillated between Taliban control of the city and short-lived gains by Nato-assisted Afghan forces. But this much is clear: the city is a template for the grinding consequence of the Afghan government’s unmet promises.

Read correctly, the Kunduz chapter has profound implications for counterterrorism policy in Afghanistan and elsewhere, because good governance is ultimately the best possible antidote to insurgency. This is where Afghanistan has consistently failed. This is what the Taliban use to their advantage.

For the better part of the past decade, but more particularly after the US military’s pullout from Kunduz province in late 2013, the Taliban have been embedding in the suburbs of its capital city.

Mostly, they did not use force, or at least only against government troops and policemen. They were substantially buoyed by local resentment against the administration. More recently, they stoked the nascent goodwill towards them with an emollient hearts-and-minds strategy that even included the distribution of class supplies to girls’ schools.

This has demonstrably paid off, whatever the eventual outcome of the recent surge and riposte in Kunduz city. The Taliban seemed to have enough local support for a few hundred of their insurgent fighters to assume control of Kunduz in the course of just one morning last week. To get a sense of the fragility of the situation, consider US defence secretary Ashton Carter’s description of Kunduz on Sunday. It “continues to be a contested area”, he admitted, and neither US nor Afghan government forces had even been able to take control of the Médecins Sans Frontières hospital compound mistakenly bombed at the weekend by the Americans.

So what makes Kunduz susceptible to the Taliban? Is it that it shares a border with Tajikistan, Afghanistan’s central Asian neighbour, and is an ethnically diverse area that could reasonably be supposed to harbour a reflexive distaste for the Pashtun-dominant mores traditionally espoused by the Taliban?

Yes, but these are not culture wars. If Kunduz cleaves to the Taliban it is because it has lost faith in the Afghan authorities. Local representatives of the Afghan central government have bullied and extorted with impunity for years, eroding public support for the fledgling nation-building initiatives from Kabul. As US journalist-turned-Afghan-entrepreneur Sarah Chayes recently described the situation: “Back in the spring of 2009, when I first looked closely at Kunduz, the governor was famous for his land grabs. In an arid place like Afghanistan, almost entirely dependent on high-end agriculture, fruit growing and such, land is incredibly precious. Stealing someone’s land is worse than murdering them.”

She went on to quote the intelligence chief of the German military, which until recently had responsibility for Kunduz province: “Everyone around is corrupt,” he said.

This meant that people in Kunduz felt constantly under siege from extractive economic institutions, euphemistically described as the people’s government. This has gone on for so long that the people can no longer imagine a playing field that is anything other than skewed. It has created a void, a sliver of space for groups like the Taliban to burrow, nestle in and gain influence.

The Afghan Local Police (ALP) initiative, launched in Afghanistan in 2009, and in Kunduz a couple of years later under the auspices of the international community, is a case in point. It was meant to train local militias to stand up to the Taliban. Instead, ALP units became a hugely entitled and unaccountable entity that preyed upon the people, extorting protection money at will and punishing those who failed to cough up. They were loyal only to local strongmen and for the most part, there was no redress.

The ALP groups have had a potent effect on Afghanistan’s embryonic sense of the rule of law. They have multiplied – with disparate local warlords standing up their own forces, each of which is called the ALP – and their escalating depredations have exacerbated most Afghans’ inherent belief that self-governing arrangements are better than formal ones. In real terms, this has meant impotent anger when groups of armed men demand payment after harvest, rather than just the one that calls itself the Taliban. This is the Afghan reality and it casts a flattering glow upon the Taliban.

But Kunduz’s troubles are by no means unique. What political scientists call a “failure by design” of political entities is a national dirge across Afghanistan. It may sound frankly unbelievable given the encouraging narratives of the past 14 years, the “success stories” put out by USAid and other international agencies and the fact that Afghanistan has held presidential elections and even managed a peaceful transition of power. Several academic studies, not least last year’s offering by Jennifer Brick Murtazashvili of Pittsburgh University, have praised localism with Afghan characteristics, which is to say the tendency to “strongman governors”, former warlords who are effective precisely because they can transcend constraints imposed by the state.

Ultimately though, these are just another way to circumvent the state. As is the Taliban. And they have proved more dependable, less rapacious and more long-lived.

Chayes, whose recently published book Thieves of State forecasts that corrupt governments will continue to be the targets of insurgents who win public support, says the Taliban’s audacious attempt to take back power in Kunduz reflects the void in which they operate, rather than any particular affinity to them. “There is nothing magical about the Taliban. They’re Afghans, like the population of Kunduz. If that population was proud of its government, they could keep the Taliban out,” says Chayes.

But they aren’t and they don’t. If nothing else, the fallout of Kunduz is the crystallisation of this dismal reality.