Will the Quartet agree now to economic dialogue? 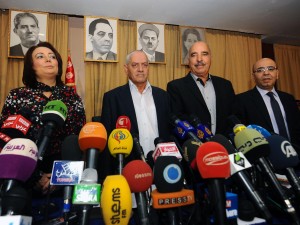 The more lasting effect of the Nobel prize is that Tunisia has been enshrined as template for positive change in whole region.

The Nobel Peace Prize for Tunisia’s National Dialogue Quartet — a clutch of civil society groups — is both an enormous boost to the country’s transition process and a dreadful burden.

In the short term, the prize means a small, significant and immediate gain for Tunisia. Its an­nouncement, while surprised book­ies and punters were betting on other, better-known entities such as the German chancellor and the pope, swiftly changed international perception.

Now, even the most cursory internet search for “Tunisia” will throw up a slew of sunshine stories about enviably peaceful dialogue and political compromise rather than the mayhem and bloodshed of the Sousse and Bardo terrorist attacks.

The day after the Oslo announce­ment, for instance, there was the New Yorker’s shiny bright paean to the “authenticity” of Tunisia’s revolution by prominent Libyan writer Hisham Matar. But this is a superficial, rather temporary effect. It only needs another terror­ist attack or similar atrocity to be destroyed.

The more lasting effect of the prize is that Tunisia, birthplace of the “Arab spring”, has been enshrined as a template for positive change in the whole region. Now, it cannot be seen to fail. It has to be both an illustration of as well as the impulse to change.

How likely is this to happen?

Regionally, international atten­tion and commendation for Tuni­sia’s process of national dialogue, which crucially ran from August 2013 to January 2014, is unlikely to trigger a late blooming of that long-arrested springtime. Conditions in Egypt, Syria, Yemen and Libya are not conducive. It matters little that the Nobel Peace Prize commit­tee — five individuals from a small country on the northern periphery of Europe — decided that the Tuni­sian model must spur on the rest of the Arab world.

Even within Tunisia, it is unclear whether the prize will promote a fierce commitment to keeping the revolution on track. This would require economic inclusiveness, which is key and overdue.

As Mohsin Khan and Karim Mezran pointed out in a paper for the Atlantic Council, a Washington think-tank, four years after the “Arab spring”, Tunisia’s economic situation is more parlous than be­fore. Citing low economic growth, very high unemployment particu­larly among young people, large budget imbalances and widening income disparities between the rich and the poor, as well as between the urban and rural populations, they described Tunisia as “an economy in a state of distress with an uncertain outlook”.

This poses enormous risks for the Tunisian process, not least, the un­dermining of people’s faith in the benefits of democracy. An Interna­tional Republican Institute survey of Tunisian public opinion after the government’s first 100 days in office found that the majority was pessimistic about democracy and crucially did not feel that it was better off after the revolution.

This is not surprising. Between January 2011 and December 2014, the five successive transitional governments focused almost ex­clusively on political and security issues rather than structural and institutional economic reforms. In a sense, this is already a betrayal of the Tunisian revolution, which was for bread and freedom, economic factors just as much as political grievances.

It is worth noting that the Tuni­sian General Labour Union (UGTT), one of the four groups that received the Nobel prize, could be said to have contributed negatively to the stop-start process of economic reform.

Earlier this year, it demanded — and got – the government to in­crease the wages of 800,000 public sector workers to a level that adds $280 million more public spend­ing to the budget. The government had offered a 2.3% increase, which was consistent with what it felt the country could afford. But the UGTT demanded 15% even though it knew that Tunisia was under pres­sure from international lenders to reduce public spending and cut the deficit to help economic growth.

The union has clout — 400,000 members, as well as the ability to bring the country to a grinding halt — and it used it. Of course, the UGTT is hardly the only prize-win­ning entity (Tunisian or otherwise) to work to its own agenda. But as Wided Bouchamaoui, president of another prize-winning body, the Employers’ Union, acknowledged, “Our challenge is now economic and social. We have to boost our economy. We have to create more jobs, to invest more.”

That is easier said than done when members of the Quartet themselves are, in some instances, interested parties.

That said, if the Quartet, which intelligently managed to engineer political compromise, were able to agree to a lasting and result-orien­tated economic dialogue that might be the greater achievement.