The EU’s cynical change of heart 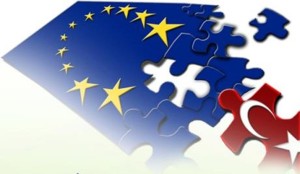 urkish President Recep Tayyip Erdogan is not known to be a fan of Groucho Marx or of that particular genre of impromptu innuendo-laden wisecrack but he might want to consider borrowing one of the comedian’s most quoted lines: “I don’t want to belong to any club that will accept me as a member.”

Marx is said to have written that response to an elite private club in the 1940s. Though the words vary by storyteller, as does the name of the establishment at which they were directed, it’s clear that Marx doubted the club’s judgment.

Erdogan might be entitled to do the same with the European Union, which his country has aspired to join for the better part of 30 years. A desperate European Union suddenly said October 16th it wanted to “re-energise” Turkey’s long-cherished, long-stalled mem­bership bid in exchange for its help with stemming the ceaseless flow of refugees to Western Europe.

This, after years of expressing grave concern about Turkey’s at­titude towards freedom of speech, democracy and minority and hu­man rights.

On October 18th, German Chancellor Angela Merkel travelled to Ankara to repeat the upbeat message, a remarkable step for a politician who has always pro­posed a partnership deal, not full EU membership, for Turkey. And Brussels cannily postponed to an unspecified date its annual report on press freedom and corruption in Turkey. The report is part of the regular health check the European Union performs on any country that applies to join the bloc.

There is a breathtaking trans­parency about the cynicism with which the European Union is at­tempting to buy Turkey’s acqui­escence in its frenzied (if entirely understandable) attempt to choke the influx of migrants.

The European Union has long pointed out the flaws in Turkey’s respect for the rule of law and civil liberties. Some years ago, it casu­ally — and deliberately — froze the membership process even though Erdogan, then the prime minister, had not quite metamorphosed into an authoritarian and increas­ingly autocratic sultan. But to now promise a quid pro quo and sum­marily jettison its red-line concerns hardly suggest that Europe works to incorruptible principles and sound ethical considerations for membership.

Clearly, it is the right moment for Erdogan to contemptuously say as Groucho Marx would that he would not want to join this club. He hasn’t, though he wither­ingly discerned “insincerity” in the European Union’s offer of an accelerated membership bid. And his Justice and Development Party (AKP) spokesman, Omar Celik, described it as “political bribery”.

Even so, these, like the Euro­pean Union’s proffered deal, are mere words. Neither side probably intends to stand by them. Europe is offering Turkey an IOU it may find impossible to cash mainly because of opposition to its membership from Cyprus and Austria. For his part, Erdogan followed his jibe at the European Union with a repeat plea for membership. “Why don’t you take Turkey into the EU?” he asked, leaving out the key “right away”.

He and everyone else know full well the inherent problems. Consider how long Turkey has been rebuffed by the European Union. It was officially recognised as a candidate for full member­ship in December 1999 and started formal negotiations on the same day as Croatia in October 2005. In 2013, Croatia became the European Union’s 28th member.

Turkey, however, seemed no closer to its goal. The official explanation was always Ankara’s shortcomings but privately, its place in the European club was acknowledged as a unique and headache-inducing problem. Is this mainly Muslim country European enough to join the European Un­ion? If it does, would it not change the whole character of the union, its culture and values?

The impasse is about European-ness but it is the governing Islam­ist AKP that has been the most steadfast about joining Europe. In January, when Prime Minister Ahmet Davutoglu told his party’s MPs, “We are part of Europe. Eu­rope is us, we are Europe”, he was deliberately echoing the words of Turgut Ozal, who submitted Turkey’s original 1987 application to join the EU’s predecessor, the European Economic Community.

Davutoglu was speaking after visiting a Paris stunned by the Charlie Hebdo attacks and he spelled out Turkey’s capacity to cover the full span of European and Muslim identities with the sort of an erudite speech that might be expected of a former university professor.

“When we’re in Paris, Berlin, Brussels, we speak as Europeans; in Samarkand and Bukhara we speak as descendants of Hoca Ahmed Yesevi [a Turkish poet and Sufi]. In Damascus, Baghdad and Mecca we speak as children of the Prophet; in Sarajevo and Skopje as the offspring of the Ottoman conquerors,” Davutoglu said.

If Europe took in Turkey, it would be enlargement — in scope, nuance and meaning — beyond anything it might have planned. But don’t hold your breath.