Freeman’s Arrival is about that electrifying moment we reach somewhere 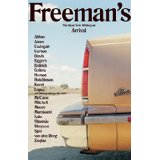 I just ordered a copy of Freeman’s Arrival, a new themed collection of stories that is said to be like a new kind of Granta. But not.

My reason, I have to confess, was hearing Aleksander Hemon talk about the story he contributed to the anthology. Having recently read and thrilled to Mr Hemon’s ‘Islands’ (excerpt at the foot of this blog), ‘The Noble Truths of Suffering’ and ‘Stairway to Heaven’, I wanted to read the newest offering from the writer once called the “new Nabokov”.

Yes, Sasha Hemon’s story is remarkable for anyone who likes words. You have to be awed by the grim determination he showed in excising Bosnian from his life (and mind) after hearing about the  Serb prison camps at Omarska and Trnopolje, where Bosnian Muslims were starved, tortured and executed. In a self-amputation of sorts, he stopped writing in the Bosnian language. And taught himself English.

Apparently, Mr Hemon’s new story for Freeman’s Arrival is about his Bosnian parents’ sense of displacement in and adjustment to Canada.

A new Hemon story may be a good reason but not the only one to be interested in Freeman’s Arrival. It’s a collection that has been put together by John Freeman, formerly a Granta editor. It seems particularly prescient to choose arrival as a theme at a time of great movement across the world. Syria and Eritrea are disgorging people. On Monday, November 2, UNHCR said that almost as many migrants reached Europe by sea in October as in the whole of 2014. A total of  218,394 people arrived; just over half of them were Syrian.

The anthology’s publisher, Grove Press, describes the theme as follows: “We live today in constant motion, traveling distances rapidly, small ones daily, arriving in new states… (here’s) the best new fiction, nonfiction, and poetry about that electrifying moment when we arrive.”

Mr Freeman himself argues that the collection will bring about a different sort of journey for the reader: “stories and essays, even the right kind of poem, will take us somewhere else, put us down somewhere new.”

And Malcolm Forbes reviews it as follows: “the focus is on the euphoria, or the anticlimax, of arriving somewhere — either reaching a destination or achieving a goal.”

Excerpt from ‘Islands’ by Aleksander Hemon:

We walked up a dilapidated, sinuous road exuding heat. Uncle Julius’ sandals clattered in a tranquilizing rhythm and I felt sleepy. There was a dense verdureless thicket alongside the road. Uncle Julius told us that there used to be so many poisonous snakes on Mljet that people used to walk in tall rubber boots all the time, even at home, and snakebites were as common as mosquito bites. Everybody used to know how to slice off the bitten piece of flesh in a split second, before the venom could spread. Snakes killed chickens and dogs. Once, he said, a snake was attracted by the scent of milk, so it curled up on a sleeping baby. And then someone heard of the mongoose, how it kills snakes with joy, and they sent a man to Africa and he brought a brood of mongooses and they let them loose on the island. There were so many snakes that it was like a paradise for them. You could walk for miles and hear nothing but the hissing of snakes and the shrieks of mongooses and the bustle and rustle in the thicket. But then the mongooses killed all the snakes and bred so much that the island became too small for them. Chickens started disappearing, cats also. There were rumors of rabid mongooses and some even talked about monster mongooses that were the result of paradisiacal inbreeding. Now they were trying to figure out how to get rid of mongooses. So that’s how it is, he said, it’s all one pest after another, like revolutions. Life is nothing if not a succession of evils, he said, and then stopped and took a pebble out of his left sandal. He showed the puny, gray pebble to us, as if holding irrefutable evidence that he was right.