Presidential debates confirm the world’s view that Americans are buffoons 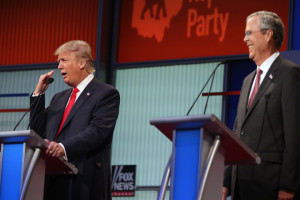 Today, the Republican Party’s presidential contenders have their fourth debate, in Milwaukee.

America’s presidential election just as much as its martial reflexes, contributes to the world’s disdain for it. Wherever you are – in a barrio in Caracas, at a café table on the Avenue Habib Bourgiba in Tunis, having dinner in your middle class home in Delhi, in an upscale office in Dubai – Americans look and sound pretty silly when their politicians go on TV and turn politics into a reality show. It’s not just Donald Trump, mind. The theatre of it all generally tends to overwhelm any substance.

For non-Americans, it merely confirms suspicions that all Americans are ignorant buffoons with big guns.

This is why it is hard not to be persuaded by Bloomberg View’s excellent suggestion for reform of the system of presidential debates. Click here to read it in full, but if you don’t, here’s the main point in one sentence:

** Ditch the live audiences, turn off the attempt by candidates and moderators to play to the gallery and let candidates debate amongst themselves.

Sounds pretty sensible to me. As has been pointed out before, this year, the debates have been autumn’s biggest TV hit – for all the wrong reasons. Offering shades of Dynasty, Dallas, the West Wing, and several reality shows.

As Bloomberg View says, “But presidential debates should strive to inform more than entertain, and on that score they could stand some improvement.”