Amedeo Modigliani is the very artist for our fiercely frank, candid camera age 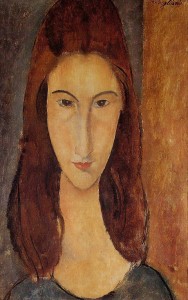 Who was Amedeo Modigliani that his paintings sell so startlingly well in the 21st century?

During his lifetime, the Italian painter and sculptor was not particularly well known (or well thought of). He lived in Paris for a long time, where he met Picasso. He lived a Bohemian life – self-destructive in its debauchery and drugs and alcohol overuse. His style, which elongated figures and faces and gave them a subtle melancholy, wasn’t well received at the time he worked. The mask-like faces he portrayed were clearly influenced by sources such as African art.

So why has his painting of a sultry nude on a red couch with a blue cushion (Nu Couche, Reclining nude) sold for $ 170.4 million at Christie’s in New York. (Click here for the Bloomberg news story.)

Mostly, of course, because the art market must constantly move in breathless ways if it is to make the big bucks. That’s why Modiglianis have become trophy paintings of the 20th century.

But there’s more. This particular 1917 painting had the highest valuation among almost 2,000 lots offered by three major auction houses in semiannual sales of Impressionist, modern, postwar and contemporary art.

That said, Modigliani is the very artist for our let-it-all-hang-out age. His nudes were fiercely modern, complete with body hair and utterly devoid of modesty. That must surely accord with a time when we think nothing of sharing our innermost thoughts with countless strangers on social media?