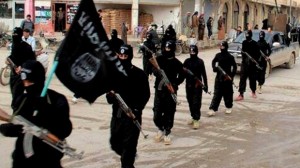 Rhetorical fireworks, at the very least, are in prospect after Turkey shot down a Russian plane on the border with Syria in a week of quickening diplomacy to discuss France’s proposed “grand and single coalition” against ISIL.

The incident, the first time a Nato country and Moscow have exchanged direct fire over the crisis in Syria, illustrates the grave risks posed by the lack of an agreed international plan on how to fight the extremist group.

The French president meets his Russian counterpart today. On Monday, the British prime minister visited Francois Hollande in Paris and talked tough and Vladimir Putin met Ayatollah Khamenei in Tehran and talked smart. On Tuesday, Mr Hollande hung out with Barack Obama in Washington and talked emolliently. Everyone promised a mighty war against the extremist group. No one said how.

It is noteworthy that even last week’s UN Security Council resolution 2249, which called on member states to “eradicate [ISIL’s] safe haven [and] redouble” action against it, did not invoke Chapter VII, which would give specific legal authorisation for the use of force.

Clearly, talk of an all-out war against ISIL is convenient political posturing. It is a crisis-management tool that employs patriotic rhetoric, claims moral superiority and appeals to national identity and cultural values. It reassuringly suggests action without the troublesome specificities of an imminent start date, committing ground troops and a battle plan.

So far, Mr Obama’s grand concession to tackling ISIL in Syria – the first official deployment of 50 special operations US troops to the north of the country since the anti-ISIL coalition was formed – is no more than a promise.

Just days ago, US special envoy Brett McGurk assured that the Americans would be on the ground in Syria “very soon”. And Mr Obama’s deputy national security adviser has reiterated that the Paris attacks alter nothing, America would stand “shoulder to shoulder” with France but there would be no major shift in strategy in the fight against ISIL.

The American position pleases no one and never has from the start of the Syrian crisis. However, it does at least have the virtue of being consistent. In a speech to the Overseas Security Advisory Council in Washington, US secretary of state John Kerry was unequivocal: “Most people don’t think that another invasion by Americans in yet another Muslim country in which the local citizens are not prepared to fight back and hold the land that you then gain makes a lot of sense,” he said. But he also insisted that “there is a strategy and it is clear and it’s working, not as fast as anybody would like, but working”.

What is this strategy?

According to America’s commander in chief, it is three-pronged: cutting off the extremist group’s financing; hunting down its leadership; and dismantling its networks and supply lines.

His defence secretary, Ash Carter, has told the US Counter-ISIL Senate Armed Services Committee that he inclines to a tighter three Rs strategy: Raqqa, Ramadi and raids.

These one- and two-syllable goals sound deceptively manageable but Mr Carter, a scholar of both medieval history and physics, at least had the intellectual honesty to admit they needed “coordinated efforts across all of the so-called nine lines of effort”.

These include supporting effective governance in Iraq, enhancing intelligence collection and stopping the flow of foreign fighters, all enormous and time-consuming pieces to fit in the jigsaw.

Mr Obama and his defence secretary offer useful thumbnail sketches of handy tools to disable a terrorist network. But these cannot be described as a war strategy.

Even the US department of defence and the department of state, which often disagree on points – and policy – appear united in their dismay at the troubling lack of a grand war plan. Senior US military officers and ambassadors, all of whom have served in Iraq and Syria, are on record with their view that drones and additional air strikes are tools of war, not a strategy.

If there is a sense of an Alice in Wonderland quasi-war, this is wholly appropriate considering the revelations from an expanding US Pentagon investigation of Centcom, as the US defence department’s Central Command is known. Analysts say that Centcom supervisors revised intelligence assessments and conclusions to mask some of the American military’s failures in training Iraqi troops and beating back ISIL.

Their alleged goal was to overstate the progress of American air strikes against ISIL, an attempt to provide feel-good reports on US action against the group. It is still unclear if this is why Mr Obama appears so determinedly sanguine about the US response.

Even so, the urgent reality of the situation cannot be denied. After mounting multiple attacks on Paris, ISIL felt emboldened enough to issue another threat to France, which was positively Elizabethan in its devilish imagery: “The smell of death will never leave their noses as long as they lead the convoy of the Crusader campaign.”

Brussels was in lockdown for days for fear of a terrorist attack by an ISIL-inspired fugitive. Much of Europe is jittery and there is no knowing how or when the fever of fear will break.

The cause must be treated and for this there must be a plan not a generalised list of tactics or separate intervention campaigns in Syrian space by disparate international forces.

As an American general who went on to become president once said, “in preparing for battle, I have always found that plans are useless, but planning is indispensable”.