Things to look forward to in 2016: Why fizza-ma-wizza makes us giggle 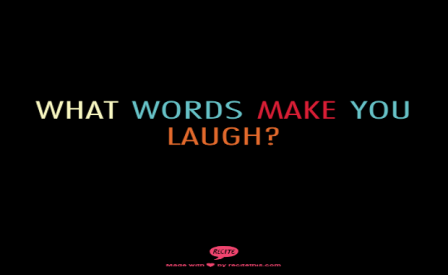 In January, the Journal of Memory and Language will publish a study on why some made-upwords sound funnier than others and how their silliness comes from the letters used.

So, fizza-ma-wizza-ma-dill raises a smile in a way that cata-ata-mata-afa-daba would not.

The more uncommon the letters used, the greater the funny bone effect.

‘Z’, for instance, is always a good one to get a giggle.

That’s what psychologists and linguists from the universities of Alberta in Canada and Tübingen in Germany found when they showed more than 900 people 6,000 made-up words designed to sound close to real, pronounceable words. The aim was to determine which strings were deemed reliably funnier.

They analysed the participants’ responses and eliminated strings that sounded too much like obscene words (“focky”, “clunt”). They re-tested their analysis on 56 fluent English speakers and found, as Quartz wrote, that unlikely words were reliably deemed funnier.

Chris Westbury, the study’s lead author, has offered his take on the findings. It’s all to do with German philosopher Schopenhauer’s idea that “humour comes from a violation of our expectations.”