What’s the point of Serial, Season 2, which is all about Bowe Bergdahl? 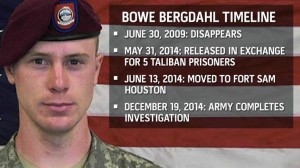 ** Is it to shine the light on the pointlessness of being in the US military?

** Is it a 21st century podcast version of Catch 22, the novel set on a US base during World War II?

** Is it a long trailer for Mark Boal’s forthcoming film on Bowe Bergdahl, the American soldier who left his Afghanistan base and was captured by the Taliban in 2009?

No one is really sure.

But mention Bergdahl, who was controversially exchanged by the US for five Taliban detainees five years after his capture, to his brother officers and they’re likely to turn all eastern or Arab and spit.

Bergdahl is dangerous for the US military – for any military, really. He was manifestly indisciplined. He deserted and trial or not, he may or may not end up becoming a bit of a hero. Or an anti-hero. (An anti-hero is a hero of sorts.) Even Donald Trump has interested himself in Bergdahl. He has praised the fact that he was tortured by the Taliban. “They beat the crap out of him, which is fine,” he has publicly said. That’s the sort of viciousness Bergdahl seems to bring out in some Americans.

Anyway, back to Serial, Season 2, which is made by the creators of This American Life, has at least 70 million fans, and is a well-crafted, easy-listening podcast. Click here for Season, Serial 2. The first episode (on Dec 10) became ITunes’s most listened to podcast. The second episode is due tomorrow, Dec 17.

Serial is considered so significant that Slate even has its own weekly Spoiler Special. Click here for the Slate Spoiler on Serial, Season 2.

The Slate Spoiler is interesting if only because in the first week, Gabriel Roth and Katy Waldman discussed a key aspect of Serial, Season 2: what does it life in the US military really mean? What should it mean? The discussion with Afghanistan veteran Adrian Bonenberger goes to the heart of the Bergdahl story.

This has to be significant in the context of the declining numbers signing up to the US military.