Things to look forward to in 2016: Fresh secrets of Tutankhamun’s tomb 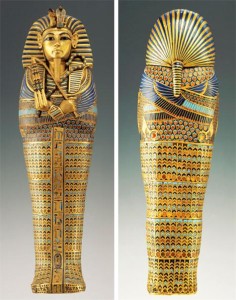 It was in November 1922 that archaeologist Howard Carter opened Tutankhamun’s tomb. Mysterious stories swirled around ever after about the “curse” that came with violating the sleep of the boy king. This, despite Carter dying of Hodgkin’s Disease 17 years after making the first “tiny breach in the top left hand corner” of the doorway (with a chisel his grandmother had given him for his 17th birthday.)

The result of the discovery of Tutankhamun’s tomb with its intact mummy and treasures was Egyptomania.

Now, we must prepare to be surprised again. According to every indication, there is more to find and yet another British archaeologist, Nicholas Reeves, is about to embark on the job.

High-definition colour photographs of the tomb’s walls, taken in 2014, show fissures that suggest two other chambers may lie behind. Mr Reeves has been given permission by the Egyptian authorities to study the walls further.

Could they be the final resting place of Tutankhamun’s stepmother, Nefertiti?

That’s Mr Reeves’s theory and as The Economist pointed out last month, it’s based on “disarmingly simple” evidence, which is “in fact free to see on the internet in the form of photographs published by Factum Arte, a Madrid- and Bologna-based specialist in art replication.”

But, the Nefertiti hypothesis may be well supported. Egyptologists have long remarked on the oddities of Tutankhamun’s tomb – its smallness; seemingly hurriedly placed second-hand objects; that its main axis is angled to the right of the entrance shaft, an arrangement typical of Egyptian queens rather than kings.

Archaeologists have identified many tombs and mummies from Tutankhamun’s dynasty, Ancient Egypt’s 18th, but not Nefertiti.