The Acropolium, Carthage. African ambition; relics of that Crusader zeal 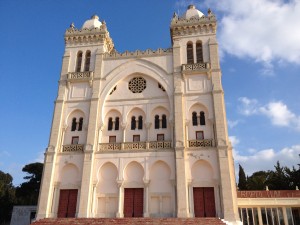 On to the Saint Louis cathedral, now known as the Acropolium and no longer used for worship.

It was built between 1884 and 1890 under the French protectorate and acquired primacy for all of Africa.

Louis IX (Saint Louis), he of the Crusader zeal, arrived in Tunis on his way to yet another scrum (the eighth and final Crusade). But he died possibly of dysentery and part of his remains were buried in the cathedral.

(Tomorrow: The imperial baths at Carthage were the 3rd largest in the Roman world)