Next year is full of good omens for India-Pakistan 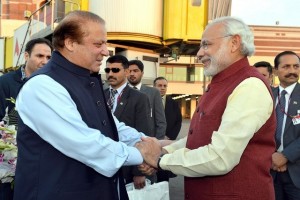 It rarely happens that a photo opportunity for the internet age is tailor-made for a philosophical quote from imperial Rome. But when India’s Narendra Modi dropped by his Pakistani counterpart’s estate in Lahore on Christmas Day, it might have been an appropriate moment for Nawaz Sharif to recall Seneca.
Mr Modi’s chummy visit seemed to dramatically indicate that the new year would mean a new beginning in neighbourly relations after 68 years of disagreements, badmouthing, wars and skirmishes of all sorts. But Mr Sharif, who was prime minister when another Indian leader, Atal Behari Vajpayee, uniquely journeyed to see him on a bus, could have told Mr Modi that every new beginning comes from some other beginning’s end. And that in this Senecan fragment lies a world of wisdom especially for South Asia.
New beginnings are only important if they lead to a new narrative. How likely is it that 2016 will be a year of peace for the subcontinent?
There are four good omens and they may be the result of a particular confluence of the planets. Or to do with luck, which Seneca is said to have believed was the union of preparation and opportunity.
Indian and Pakistani officials separately say that the US played a key role in preparations for the sudden bilateral bonhomie.
The Indians say US secretary of state John Kerry, among others, spoke long and hard about India to Pakistan’s army chief, General Raheel Sharif, when he visited Washington last month. The Pakistanis say that Barack Obama did the same with Mr Modi when he was in the US in September. Neither side admits this is the case.
The second key element is the opportunities that have been afforded by the search for stability in Afghanistan. There appears to be a new, uneasy but undeniable accommodation between Pakistan and India, which acknowledges that each has a role to play and influence to project in Afghanistan.
This month, India volunteered to host the next Heart of Asia conference, a regional 14-country forum focused on Afghanistan and economic cooperation. It was significant that the offer came from the Indian foreign minister while she was visiting Pakistan. Meanwhile, the accelerating tempo of the India-Pakistan tango in Afghanistan is clear from the rotating high-level visits.
General Sharif was in Kabul on Sunday to find ways to revive stalled peace talks with the Taliban and he agreed to hold a quadrilateral meeting between Afghanistan, Pakistan, China and the US in early January on a comprehensive road map for meaningful peace. Mr Modi flew to Pakistan on the very day that he made a strong speech in Kabul against “nurseries of terror”, promised to boost Afghan defensive capabilities and supplied attack helicopters, thereby breaking a self-imposed arms embargo.
The third element is the appointment of a recently retired general, Naseer Khan Janjua, as Pakistan’s national security adviser. The dislodging of Sartaj Aziz, a civilian confidant of Mr Sharif, is seen to have given the Pakistani military confidence to restart dialogue with India. This is mostly because it knows the army viewpoint will be well represented in any discussion, whether about Indian allegations of terrorism or on Kashmir.
The fourth and final good omen is Pakistan’s current focus on several big-budget regional economic projects, including the $46 billion (Dh169bn) Pakistan-China corridor. To stay on track and ultimately enable Chinese investment to flood into Baluchistan, particularly Gwadar district – one of the poorest parts of the country – Pakistan must manage tensions with India. Islamabad repeatedly alleges that India supports militancy in Baluchistan, something Delhi routinely denies. A rapprochement would be of enormous value to Pakistan, something that its politicians and pundits seem to realise, if one goes by their hosannas for the Modi-Sharif love-in.
These are all powerful signs that may presage a change in the tortured ill-logic of India-Pakistan relations. At a purely symbolic level, Mr Modi achieved something extraordinary by stopping off in Pakistan on Mr Sharif’s birthday and while his family prepared for a wedding. The last time an Indian prime minister visited Pakistan was 2004 and that was for a stiff international conference, not this sort of casual exchange over tea.
Relations between Indian and Pakistani leaders are not noted for their spontaneity and if Mr Modi manages nothing else, he will at least have tried to nudge bilateral interactions into a new era of apparent informality more suited to our times. As one Indian official put it: “We want to move out of page 1 to page 21.”
Is this enough to move to page 21? Unfortunately, there is little chance of that unless India and Pakistan are able to honestly – without histrionics and hyperbole – discuss the core issues that lock them into mutual distrust. These include Kashmir and mutual allegations of support for terrorism and cross-border militancy.
Mr Modi has acquired an international reputation as a man who is addicted to a good headline and a folksy tweet. He does not, of course, bear sole responsibility for the outcome of the surprise diplomacy he initiated when he flew into Lahore, but it is he who must prove it was statesmanship not just showmanship.
On Twitter: @rashmeerl
Original link