Too early to predict the demise of ISIS 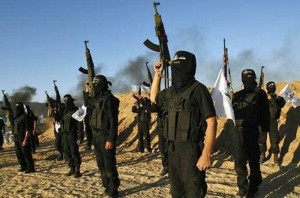 If ISIS went broke in 2016, it would be the end of an audacious run of good luck and grotesque strategy. But how likely is this to happen?

What does the new year portend for the Islamic State (ISIS) and its leader, Abu Bakr al-Baghdadi? Probably nothing good. Saudi Arabia has formed a 34-member antiterror­ism coalition and, however vague the strategy, there does at least seem to be a hardening of world resolve against ISIS.

And then there are the lingering effects of all that happened to the brutal extremist group in 2015: the loss of the Iraqi town of Sinjar, the capture by Kurdish forces in Syria of oilfields west of Sinjar, the pres­sure being brought to bear on the ISIS-held Iraqi city of Ramadi and the coalition strike that killed Abu Salah, ISIS’s finance minister.

Most significant of all: the slight loss of presence on the propaganda front, according to Aaron Zelin of the Washington Institute for Near East Policy, who founded the widely cited website Jihadology. net and whose research focuses on global jihadi groups, particularly ISIS, Jabhat al-Nusra and Ansar al-Sharia.

Zelin, noting that ISIS is posting fewer pictures online, discerned that the group is losing its digital cutting edge. He also said that much of what it puts out is of shoddier quality than before.

Perhaps, though it sounds like wishful thinking considering the coldly focused creative energy and impeccable production quality of the extremist group’s latest online video. It showed a chilling game of hide-and-seek-and-execute among young boys in the ruins of a Deir ez-Zor castle.

Even so, the year gone by can legitimately be said to have been dif­ficult for ISIS. Losing Sinjar makes the journey between the so-called caliphate’s main cities — Mosul in Iraq and Raqqa in Syria — longer and more perilous. Ramadi is a big city and its loss would be signifi­cant for the group. The death of a senior ISIS figure such as Abu Salah undoubtedly affects morale. And the capture of the oilfields will constrict ISIS’s revenue stream, US President Barack Obama has promised.

What could make 2016 even worse? Loss of funding. This may be the pivot on which ISIS’s fortunes will turn this year. Cicero, who knew a thing or two about politics and the prosaic reality of military might, once said: “The sinews of war are infinite money.”

If ISIS went broke in 2016, it would be the end of an audacious run of good luck and grotesque strategy. But how likely is this to happen?

There may be some pointers in the problems that the UN Security Council was unable to address at its first meeting to cut off ISIS funding. The finance ministers met and brainstormed before the holiday break but were presum­ably stumped by the following, fairly basic issues:

— Unlike al-Qaeda, ISIS is not dependent on money from beyond the borders of its so-called state.

— ISIS, which controls territory the size of the United Kingdom, taxes the approximately 8 million residents of its “state”, sells oil and allows the sale of antiquities, thereby earning what it needs to buy weapons, trucks and other necessaries to pursue war. Accord­ing to a 2014 Thomson Reuters study, the extremist group has more than $2 trillion in assets under its control, with an annual income of $2.9 billion.

— Bombing ISIS-controlled oil infrastructure has meant the destruction of hundreds of their tanker trucks, wells and refineries but this won’t disrupt tax-collec­tion activity.

The only positive prediction about ISIS’s ability to raise money in 2016 revolves around a negative and dismal reality. The people in its heartland in Iraq and Syria are becoming poorer by the day and there will come a time when they will be unable to scrape together anything of any value to pay the taxes ISIS has imposed.

Adam Chodorow, a law profes­sor at Arizona State University who has written about ISIS’s meth­od of governance, says the group is “very limited” when it comes to a real tax system. “They can go and take one or two of your goats but eventually there are no goats left. I don’t think they’re going to be able to raise too much more money,” he predicts.

There is nothing to cheer about the progressive impoverishment of a whole people except that it may be the only implosion that can take the heart and guts out of this swaggering brute force.