The Arab world in the UN Human Development Reports 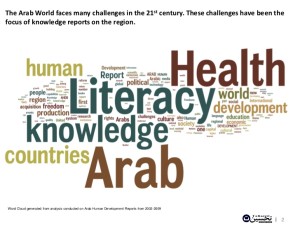 In the absence of the physical product, there are only two certainties about the 2015 Arab Human Development Reports: It will be published late and it will make for dismal reading.

Consider the latest statistical information on the region in the UN Human Development Index (HDI), which annually assesses the overall state of the world. The Arab states region, says the United Nations, has the highest youth unemployment rate in the world — 29%. At 23%, the region has the lowest female workforce participation rate worldwide.

Finally, despite a strong entrepreneurial spirit, start-ups are not the norm because it is hard to obtain investment from outside the family and harder still to find partners to expand. Female representation is low in start-ups.

So, what’s new? In 2002, the first Arab Human Development Reports (AHDR) offered an unsparing assessment of why, as it put it, “the region is richer than it is developed”. The barrier to better Arab performance is not a lack of resources, that report concluded, but the shortage of three essentials: freedom, knowledge and woman-power.

Is there anything good to report on the Arab states 13 years on?

In symbolic terms, it is good that five Arab League members — Qatar, Saudi Arabia, the United Arab Emirates, Bahrain and Kuwait — are in the first 50 of the 2015 UN report’s “very high human development” countries. A country scores a higher HDI if there is improved life expectancy at birth, longer education periods and higher income per capita. To that extent, it is unsurprising that some rich Arab states should have a high HDI. Their positioning is the result of resources not resourcefulness.

There have, however, been gains in real terms as well, though hardly as dramatic as the wider world might have liked.

In the UAE, for example, women are allowed to perform military service. Female candidates ran in the Saudi municipal elections in December — a first — although they will have only a slight purchase on policy and there is no suggestion of substantial changes in their rights or visibility.

A statistical comparison of the Arab states over a quarter-century from 1990 shows that life expectancy increased 15 years, children spend more time in school and infant mortality has fallen. Across the Arab world, women slightly outnumber men in tertiary education, with a female-to-male enrolment rate of 108%.

And yet, even if Arab women find and take jobs, they generally leave the labour force around the age of 25. This is largely because family structures remain quite traditional and the decision to work is seen as a collective responsibility rather than one left to the individual and her hopes and dreams.

Unsurprisingly then, three out of four Arab women — whether college graduates or relatively uneducated — remain outside the workforce.

It is clear there is something other than education and skill sets that is holding back Arab women and, by extension, a region so enviably endowed with oil, demographic resources and located in the plum centre of the world map.

The golden age of Islam is long past but the Arab region has had noteworthy successes more recently than that. Egyptian sociologist Nader Fergany, who edited the first AHDR, recently pointed out that in the 1800s Japan sent a delegation to Muhammad Ali Pasha’s Egypt to study the education system. In 1960, development indicators in Egypt were better than those in South Korea. The first aeroplane to break the sound barrier over Cairo in January 1967 was a joint Egyptian- Indian production and it was Egypt that built the jet engine.

If Egypt, once the Arab world’s natural leader, could do all of this within living memory, why not now?

Fergany, who runs al Mishkat Centre think-tank, offers a diagnosis that may be as true for Egypt as for the region. Arab leaders see the people as consumers, not creators of the national story, he said. They see them “as empty mouths to be fed and not as the nation’s most important potential wealth.” There is a terrible granularity in the statement.

And it is handily, if unfortunately, illustrated by the small numbers of women at work in the region.