Come on, Cologne does not mean that cultural coexistence is impossible 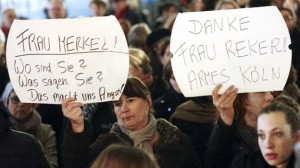 This is not about the terrorist threat. As Mr Hutton says, “terrorism can be dealt with by aggressive police, detection and surveillance work…managing unreconstructed attitudes towards women by newly arrived young Arab men is far harder and much more menacing. It poses the question that a liberal society does not want to confront. Is cultural coexistence possible – and if not, what is to be done?”

He’s not wrong but is this to suggest it’s never been done before? That Chinese, southern Europeans, Afghans, Pakistanis, Indians, Bangladeshis, Nigerians, Somalis never moved to America and were never absorbed there?

That cultural coexistence has never happened before?

A combination of rule of law, the host society’s expectations and most individuals’ natural instinct to make a go of life generally works.

Even as I write this, I know that at least four Afghan male former colleagues are settling into their new lives in the West – three in the US and one in Holland.

Of course, the huge numbers of refugees in Germany – all pretty new to the country and culture and all there at the same time – puts a different complexion on matters. But that’s where rule of law should kick in. Fear of expulsion does wonders for cultural coexistence.