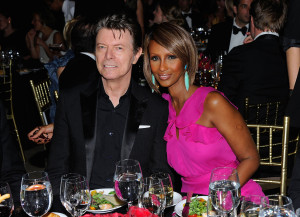 When news of David Bowie’s death started to filter in – at about 7 o’clock on Monday morning – I wondered why no one said anything about Iman, the Somali former supermodel who was his wife for 24 years.

Perhaps Iman was too stricken. After all, theirs had been a union that lasted, despite the unpromising beginning.

As Iman told The Independent a couple of years ago, ““For him [it was overwhelming], I was not ready for a relationship. Definitely, I didn’t want to get into a relationship with somebody like him.” Bowie had said that when he met Iman he “was naming the children the first night”.

That love seems to have endured. They had a daughter, now15, and became an old married couple. Bowie helped Iman’s many philanthropic efforts. In late 1990, they participated in a fundraiser focused on curing AIDS. In 2006, Bowie collaborated with Alicia Keys and performed live at a concert benefitting Keep a Child Alive, while Iman hosted a black-tie dinner.

One doesn’t think that pop stars – especially someone so unconventional as Bowie – would plump for married domesticity but as Iman said in 2014, he was even more “of a homebody” than she. Happiness does that to you, I guess.