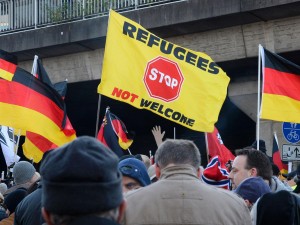 The Cologne conundrum is a bad start to the year. Conundrum because it is confusing to see a fantastically rule-bound country such as Germany tie itself up in knots about the alleged offences committed by crowds of refugees in Cologne, Hamburg, Stuttgart and Bielefeld on New Year’s Eve.

It is puzzling that so well-ordered a society — the police, media, even the victims — should have kept quiet for five days about the alleged sexual harassment and robbing of “hundreds” of women by groups of men said to be of “Arab and North African” ethnicity.

It seems especially odd that once the word got out, German public opinion became so inflamed and fearful about refugees as a bloc.

The word that comes to mind for everything described above is convenience.

It is convenient to suggest there was a well-meaning politically cor­rect conspiracy of silence to protect refugees. Now, it is convenient to demonise them as a group. After all, 1.1 million entered Germany in 2015 and more arrive daily. Ten­sions have been building in the months since Chancellor Angela Merkel controversially declared an open-door policy towards refugees. Now, the right-wing Alternative for Germany (AFD) party opportunisti­cally says the Cologne incidents were “the appalling consequences of catastrophic asylum and migra­tion policies”.

They weren’t really and it is not desirable, even if it were possible, to criminalise enough refugees so that Arabs and North Africans henceforth do not dare claim shel­ter in Europe.

Could there be a worse way to pull back the welcome mat Germa­ny generously put out for refugees?

Straight talking would be better than this incoherent and illiberal babble about the threats posed to Teutonic women by maraud­ing gangs of culturally backward men. Is this the experience of every Western city with substantial numbers of Arab and North African migrants?

So what really happened and what is to be done?

The facts are hazy but it’s clear that something unsavoury occurred in some German cities and in the Finnish capital, Helsinki, as the dy­ing year breathed its last. Police say that some refugees were involved. A Cologne police report, obtained by Der Spiegel, had an officer quot­ing one of the perpetrators claim: “I’m a Syrian! You have to treat me kindly! Mrs Merkel invited me.”

In Helsinki, police said that 15 Iraqi asylum seekers were taken into custody amid allegations of groping and harassing women near the city’s central railway station. Ilkka Koskimaki, Helsinki’s deputy police chief, said three women had filed complaints, alleging they had been kissed and touched against their will.

What does all of this add up to?

At worst, it represents criminal behaviour by some young men, who displayed utter disregard for the laws of the land and the sensibilities of women they did not know.

At best, the New Year’s Eve she­nanigans were youthful misbehav­iour by people who were probably drunk on the possibility of licence and free love in the West. In both instances, lawful punishment should be a given, no matter the origins and circumstances of the perpetrators.

It is entirely legitimate, too, for Germany to mull over, as Merkel has indicated, a change in its laws so it can expel any refugee con­victed of a crime. Under the terms of its Migration Act, Australia for instance, can deport a non-citizen — refugee or not — if that person is convicted of an offence and sentenced to imprisonment of one year or more. That Merkel wants to introduce expulsion for non-citi­zens who receive even a suspended sentence indicates the firestorm she is fighting to contain.

If anything can explain the Ger­man conundrum it is acute sensitiv­ity to its Nazi past. This has led to some of the strictest laws in the West to protect minorities from people inciting hatred. In Septem­ber, worried by the increase in hate speech against refugees, German authorities contacted major social media outlets to tamp down on the problem. In December, they reached a deal with Facebook, Google and Twitter to get tougher on offensive content.

However, hate speech against a whole community is one thing and silence in the after­math of criminal behaviour by a few people is another. It can only feed fear of the “other”, rather than bring Germans closer to those to whom they have given refuge.