Can we rely on our collective memory to preserve art for eternity? 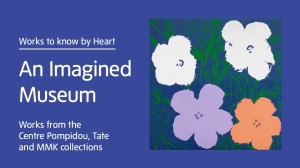 The answer is probably ‘no’ but we’ll know for sure on February 21 when the Tate Liverpool ends its mind-bending exhibition ‘An Imagined Museum’.

The whole point of the show is memory and forgetting. The exhibition brings together more than 60 major, post 1945 artworks from three prestigious galleries and visitors are told to commit whichever ones they can to memory because all those Duchamps and Warhols and Oldenburgs and Tannings are about to ‘disappear’ forever.

If they are to live on, it can only be in memory (and its retelling).

The exhibition is apparently loosely bsed on Ray Bradbury’s 1953 sci-fi novel Fahrenheit 451, which revolves around a ban on great works of literature and the need to preserve them by learning them by heart.

According to Tate Liverpool, the final weekend of the show will be an “exciting” one in which the artworks really will ‘disappear’ and members of the public will replace them, using their recollections to recreate the missing masterpieces.