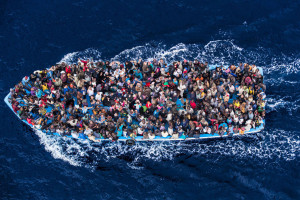 Five months on from the German chancel­lor’s compassionate welcome to refugees — “We can do it”, Angela Merkel told her country as it faced the prospect of taking in hundreds of thou­sands of Syrians — the European crisis may be hitting a wall.

There is no higher barrier that European governments can erect than the following psychological measures: threatening each other or their constituent parts with lawsuits against borders that are too open; suggesting that their people pay a special continent-wide “refugee tax”; and legislat­ing to appropriate cash and high-value assets of refugees (wedding rings and items of sentimental value excepted).

Consider the import of recent developments: One of Merkel’s leading allies, the premier of Bavaria, threatened to take her government to court unless “orderly conditions” are swiftly restored at Germany’s borders. German Finance Minister Wolf­gang Schaeuble controversially proposed raising the price of petrol across Europe to pay for the extra people the continent has to feed, clothe and house. By the end of January, Denmark will have a new law requiring refugees with more than $1,500 in cash or high-value assets to hand them over to the state. And Switzerland’s State Secretariat for Migration said local authorities may seize a refugee’s belongings if they exceed $1,000 in value.

Each of these new steps will make it harder for Europe to ac­cept refugees and for refugees to accept Europe. They may not be part of a grand plan but the cumulative effects will seem as if they were. It is what most Euro­peans want, as Malte Lehming of the Berlin newspaper Der Ta­gesspiegel recently explained: “All the parties in parliament are for refugees, and a large part of the media agrees, but at least half of the population consists of enraged citizens who feel they have no political representation and are walking around with their fists in their pockets.”

He meant Germany but it may be generally true of Europe as a whole. By every measure — po­litical statements, public debate, pollsters’ surveys, perceptibly more thuggish street and social media activity — the refugee issue has become a dangerously front-loaded continent-wide crisis. One that coarsens European self-belief in inalienable human rights and responsibilities and one that chal­lenges refugees’ belief in Europe as “a beacon of hope”, in the lyri­cal phrase used by European Com­mission President Jean-Claude Juncker in September.

And yet, so long as the war con­tinues in Syria, the flow outward of desperate and dispossessed people will continue. Where can they go? Where will they go? Europe’s new barriers — some still only in the form of mind-bending proposals — will undoubtedly serve as a deterrent. The Danish government, for instance, has lost no time in advertising its new asset-seizure legislation in the Lebanese media. It’s part of a public information campaign that Danish Immigration Minister Inger Stoejberg sees as crucial in making her country “significantly less attractive for asylum-seek­ers”.

Ditto for Germany, with its darkly emerging deep divi­sions over the post-World War II Willkommenskultur, that fabled welcoming culture towards mi­grants, which discouraged public doubts about cultural differences and integration. All across Europe, the real and psychological check­points are bound to have their intended effect. What hope then for refugees to rebuild their lives?

It has to be said, so let’s just say it. Europe does not have to be the fulcrum, pivot, cornerstone of hope for refugees from the Middle East. Their own neighbourhood bears some responsibility and this may be the time to shoulder it. Europe’s conniptions over 2015’s influx of more than 1 million refu­gees should refocus the debate on the action and inaction in the refugees’ home region. For years, the majority of Syria’s displaced have remained in their geographi­cal neighbourhood — Lebanon, Jordan, Iraq and Turkey — but till now, they lacked the protec­tion (and crucially, the papers) to allow them to work, live decently and rebuild their shattered lives. This made Europe their only hope.

But now, Turkey, which hosts 2.2 million Syrian refugees and thousands of Iraqis, is prepared to grant them work permits. It is a huge step, the lowering of a psy­chological drawbridge. This may be the way forward for a harried people, fleeing a savage war, and finding the apparent warmth of Europe’s welcome unacceptably tepid and conditional.