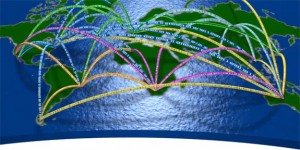 Sir Tim Berners-Lee, the man who created the world’s first web page more than 25 years ago, wants a Magna Carta for the internet.

He’s been telling the World Economic Forum in Davos that it’s time all Net-users were guaranteed complete freedom – by governments everwhere. It’s not something he’s thought up this week. Last year, Sir Tim passionately told The Guardian that the world need “a global constitution – a bill of rights.” At the time he had warned that “unless we have an open, neutral internet we can rely on without worrying about what’s happening at the back door, we can’t have open government, good democracy, good healthcare, connected communities and diversity of culture.”

And he suggested that Net-users everywhere band together and force the authorities to guarantee Net-freedom. Just like the Magna Carta of 1215, agreed between the unpopular King John and a group of barons. The original Magna Carta promised the protection of the church, protection from illegal imprisonment, access to swift justice, and a cap on the payments made to the crown.

There are some problems with Sir Tim’s call for a Magna Carta for the internet: