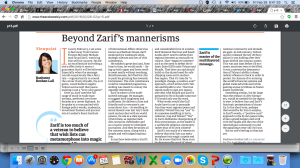 In early February, I sat some 15 feet away from Iranian Foreign Minister Moham­mad Javad Zarif, watching him sell his country. He did an excellent job but telling a story effectively is never a guarantee that it will be believed. Especially when the message sounds suspiciously like a fairy tale — regional amity is around the corner if only Riyadh, the evil genie, would believe angelic Tehran and accept that peace-making is not a “zero-sum game”. 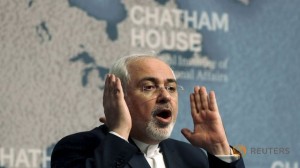 Even so, Zarif used the full range of stock-in-trade man­nerisms, perfected over three decades as a career diplomat. As he spoke to a room packed with foreign policy wonks, academics, investment bankers and journal­ists at London’s Royal Institute of International Affairs otherwise known as Chatham House, Zarif employed his trademark smile, strategic silences and lots of chin calisthenics.

He nodded a great deal and, from time to time, he would smile — lin­ing up both upper and lower teeth to meet neatly without overhang. Simultaneously, he lifted his chin to push his grinning face towards his listeners. The chin calisthenics could be considered pugnacious, smiling was meant to convey the opposite impression.

Zarif is master of the multi­layered message. He manages to suggest both toughness and cuddliness. He delivers a firm and friendly nod to everyone’s con­cerns about Iran — its seething in­ternal dissent over last July’s land­mark nuclear deal with six world powers, its role as a state sponsor of terrorism, as regional med­dler, sectarian cheerleader and as a country prone to intimidate journalists. And then he smiles all the concerns away. Along with a simple and well-judged explana­tion.

So just how believable is Zarif’s message?

Let’s examine his big idea, delivered with great eloquence and considerable force in London. Zarif declared that Iran and Saudi Arabia don’t need to define their regional interests as mutually ex­clusive. That “negative interests” such as the need to defeat the Is­lamic State (ISIS) unite Tehran and Riyadh. That they can and should build on the shared need for safe shipping zones and a nuclear-free region. That it’s time for “a paradigm change, a positive-sum” approach, which allows both Teh­ran and Riyadh to win. That Iran stands ready to sign any reason­able deal with Riyadh and Zarif is prepared to fly to Riyadh tomorrow if it would only say the word.

What words would the Gulf Arabs have to use to persuade Iran they want regional peace and stability? Would they say “yes” to its ceaseless meddling in Syria, Lebanon, Iraq and Yemen? “Yes” to Iran’s deliberate championing of Shia sectarianism, as the leader of a worldwide religious community rather than of its own citizens?

Zarif is too much of a veteran to believe that wish lists can meta­morphose into magic carpets and fly. He knows that first there must be demonstrable proof of intent.

Is Iran capable of this? Yes, at least when it comes to the inter­national community and immedi­ate gain. In mid-January, Tehran quickly released the ten US Navy sailors it was holding after their boats drifted into Iranian waters. This was just days before US eco­nomic sanctions were to be lifted. It was a noteworthy demonstra­tion of Tehran’s ability to keep radical reflexes in check in order to protect its chances of re-entering the world’s financial systems and global trade networks and while gaining access to billions in frozen assets worldwide.

Something similar, but far large than the release of a few foreign­ers, would be needed for the region to start to believe Iran and Zarif’s histrionic protestations of sincer­ity. In the short term, perhaps that would be for Iran to employ, in Zarif’s words, a “positive-sum” approach to the Syrian peace talks, strike a grand bargain and work with the Saudis and the rest of the international community to end the appalling 5-year-old civil war.

But no one’s betting on that just yet.