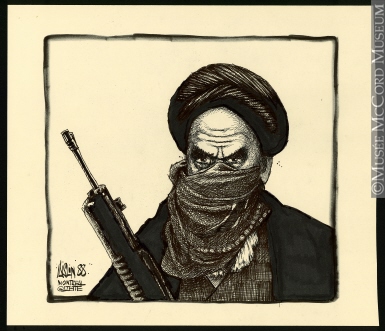 The things that Donald Trump says to rouse the masses are reminiscent of the some of the stuff that comes out of Tehran.

“Great Satan.” (Mexico or China, depending on which is the bigger irritant at the time)

“Little Satan.” (Mexico or China, depending on which is the bigger irritant at the time)

“Death to …” (fill in country of your choice)

Like Iran’s Ayatollahs, Mr Trump offers stark, simple, plug-in statements that allow people to get behind whatever he’s saying, irrespective of the facts.

What are the facts?

Bad blood with Mexico is a really bad idea for the US especially as Mexico buys more American goods than China and Japan combined.

Slapping a huge 45 per cent import tax on Chinese products would be laughed out of the World Trade Organisation (WTO).

Upon which of course, Mr Trump can start to call the WTO the Great Satan and threaten to pull out of it.

And all those American factory-workers who’d been laid off because Mexico had imposed punitive import quotas on US goods could be put back to work making munitions. A President Trump could declare war on Mexico.

No one ever said Ayatollahs are good at foreign policy.