Did Donald Trump’s bluster (and promises) ever pass muster? No 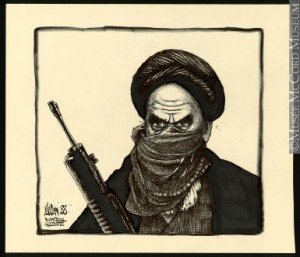 Over on Bloomberg View, Albert R. Hunt offers an insightful analysis of how much (or even if) Donald Trump could ever keep any of his most prominent promises from the campaign trail.

As much as Mr Trump snarls his extravagant promises and vows to beat the world into submission, his campaign pledges don’t add up to much.

First, national security. Mr Trump, as Hunt reminds us, “has pledged to be tough, to defeat the Islamic State by bombing oil fields, which he would then turn over to US oil companies. He would force Arabs to do the fighting against the Islamic State.” He has said he would “get along very well” with Russia’s Vladimir Putin and has admitted to receiving cues on foreign policy from watching television news programs.

What does that add up to? Leon Panetta, former defense secretary and Barack Obama’s CIA director says “it’s the sort of stuff you expect to hear at the bar at the country club.”

On mass deportations, he reminds us that Mr Trump proposes removing 11 million undocumented immigrants within two years. But he American Action Forum, a right-of-center research organization says that the economic impact of this plan would be hard to bear. The cost to the economy would be $1 trillion.

No one seriously believes that the wall Mr Trump plans to build a wall along the Mexican border, at a cost of about $8 billion to be paid for by Mexico, can happen without the American taxpayer picking up the tab. To what cost? As former Homeland Security chief Janet Napolitano recently told the BBC, “You show me a 10-foot wall, I’ll show you a 12-foot ladder.”

Finally, Mr Trump wants to impose crippling tariffs on some goods from Mexico and on imports from China. But a US president couldn’t just do this unilaterally. Mexico and China would probably go to the World Trade Organization, where they would probably win. Or they could retaliate and cripple American exports. Where would that leave American workers?