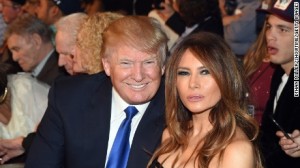 Could he? Really? Could Melania Trump, a self-confessed perfectionist, be the next FLOTUS? (First Lady of the United States.)

Mr Cassidy examines the possibility of President Trump and First Lady Melania Trump with help from political scientist Rui Teixeira, who is currently a senior fellow at the Century Foundation and the Center for American Progress.

Mr Teixeira is apparently “an expert on changing demographics and elections”. In 2004, he co-authored a book titled ‘The Emerging Democratic Majority’, which shone the light upon the growing number of minority voters across the country.

Recently, writes Mr Cassidy, Mr Teixeira co-authored a paper titled “The Path to 270 in 2016”. It argued that demographics continue to favor the Democrats in assembling a majority (270) in the Electoral College.

Clearly, Mr Teixeira should have some pretty good (and believable) ideas about whether or not so divisive a figure as Donald Trump can ever become president.

Here are some of the figures he throws out at Mr Cassidy:

** The minority vote will rise from 26 per cent to 28 per cent. About half of that increase reflects the growing Hispanic population; the other half is accounted for by rising numbers of Asians and peoples of other ethnicities.

** White voters still represent close to three-quarters of the electorate.

Potentially, therefore, it is mathematically possible for Mr Trump to win. (The Trump wave could sweep the Rust Belt states – Michigan, Ohio, and Pennsylvania, and also flip a Democratic state in the Upper Midwest, either Wisconsin or Minnesota or both. He might not even need Florida, usually a pivotal state.)

But Mr Teixeira is doubtful.

** On a national basis, Mr Trump’s support among white voters isn’t quite as widespread as it sometimes appears to be. He’s basically attracting a lot of “pissed-off” people. White college-educated voters may not buy his message.

** But most important of all is the reality that raising white working class voter turnout would also provoke a high turnout among anti-Trump voters.

Mr Cassidy concludes by reminding us that after the 2012 election, which the Republicans lost, “the Republican National Committee commissioned a report that acknowledged many of these facts, and that made the case that the G.O.P. couldn’t expect to win back the White House without doing a better job of appealing to minorities and moderates.”

Mr Trump’s path to the White House goes against that Republican acknowledgement of political reality. It is the sort of cloud cuckooland best seen from the top of Trump Towers.