Will Terre Haute pick America’s next president as it nearly always does? 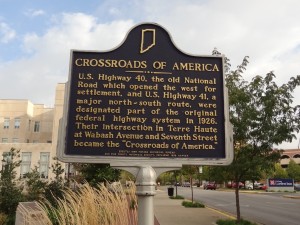 Is Terre Haute, Indiana, a microcosm of America? Is it a bellwether town? Are there really such prophetic places?

Vigo county, of which Terre Haute is the nominal capital, has only miscalculated twice since 1888. In 1908, it voted for Williams Jennings Bryan instead of William Howard Taft. In 1952, it chose Adlai Stevenson rather than Dwight D. Eisenhower.

Dave Leip says in Atlas of U.S. Presidential Elections that “Vigo County, Indiana is the most prominent bellwether of presidential elections in the country—voting for the winning candidate in every election from 1956 through 2012.”

So what makes Terre Haute so smart?

According to Politico, Vigo county’s 108,000 residents run the gamut from farmers to professors and “its nominal capital in Terre Haute, called the ‘Crossroads of America’ by the citizens”.

In December, Vigo voters who leaned towards the Republican Party appear to favour Donald Trump. Politico said that Mr Trump enjoyed “a diverse coalition of support, from the 17-year-old punk high school student on the eve of his first election to the 81-year-old Kennedy voter to the kind of folks who will reshuffle their Thursday night plans to attend a county GOP ‘Politics and Pies’ event. Coastal pundits might lament Trump’s appeal to the “low information voter”—but I can tell you one thing: Terre Haute citizens are anything but poorly informed.”

Clearly, Terre Haute needs to want to vote for Hillary if there’s to be any chance of her winning.

That’s what they think on FiveThirtyEight.

Terre Haute is where it’s at,  the then Senator Obama thought back in 2008. In Terre Haute, like so many towns in the MidWest, he said at the time, the jobs have been gone for 25 years and people are angry and bitter. Senator Obama spent a lot of time in Terre Haute. That was where he suggested that Republican voters come across to him. They would, he said, be called ‘Obamacons’.

Anyway, enough about Obama and the 2008 presidential election.

As I said above, Vigo’s Republican-minded voters seem to be inclining to Trump, but more telling may be the fact that Terre Haute’s mayor is a Republican, Duke Bennett. After he was elected, a celebratory event called Politics and Pies was apparently held. Virtually all the attendees expressed their support for Trump.

Trumpism, says James W. Ceaser, politics professor at the University of Virginia, is less an “ism” and more “a mood”. He says  it’s been at a near-boil for some time and has erupted only now because ‘they have a leader who can articulate it”.

The Indiana primaries are scheduled for May 3. Stay tuned.