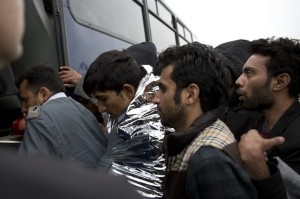 Tuesday’s multiple terrorist attacks on Brussels, administrative capital of the European Union, will temporarily draw attention away from the refugee crisis, that other supposedly existential threat the EU has been working overtime to neutralise. Endlessly haemorrhaging out of Syria’s conflict zones, nearly a million refugees arrived on Europe’s shores via Turkey last year, causing political ructions and polarisation among good neighbours.

This is precisely the wrong time for the world to get distracted and look the other way. It’s the first week of a controversial new arrangement that is supposed to help seal off Europe from the ceaseless influx of the uninvited.

From Sunday, March 20, migrants interdicted in Turkish waters can be routinely sent back to Turkey. Those who make it as far as Greek waters or perchance, Greek soil, will face a speedy assessment of their claim to asylum and failed applicants returned to Turkey. Those flash hearings — the EU dreams of being capable of turning cases around within hours — would serve as a legal fig leaf to indicate that Europe is technically complying with international law. Syrians, who are after all, fleeing a war, will be entitled to legal processing of their asylum claims in Turkey. No other nationality, including Iraqi and Afghan, need apply.

This is political histrionics of the sort that elevates dissembling into an act of statesmanship. Turkey is becoming to the EU what Papua New Guinea (and briefly, Cambodia) is to Australia — a holding refugee camp and a way to outsource responsibility. By endorsing Turkey as a “safe” country, the EU has put political advantage over principle. Chiefly, of course, it is hoping to evade its obligations under article 33 of the 1951 Refugee Convention, which contains the principle of non-refoulement or the obligation not to expel or return a refugee to a country of territory where he/she would be at risk of persecution. This is short-sighted cunning at best, long-term callousness at worst.

Even so, the EU is hoping that the deal, along with recently introduced Nato patrols, will secure its borders because the vast majority of refugees arrive by sea. Last year, according to the International Organisation for Migration, a million or so people took the Aegean Sea route to Europe, compared to just 35,000 by land.

Various European leaders, just like Australian politicians before them, are piously emphasising that the EU is engaged in a compassionate fight to end the “human suffering” of migrants being exploited by people smugglers. Addressing potential refugees, the very people to whom she pledged a warm welcome last year, German chancellor Angela Merkel said after the deal with Turkey: “To those who would embark on this perilous journey, do not risk your lives, there is no prospect of success. This is how we want to end this inhumane business model of the traffickers and restore the protection of our external borders.”

There is some evidence to show that this, at least, may be an achievable aspiration. Back in July 2013, Australia’s prime minister Kevin Rudd said much the same thing as Mrs Merkel, declaring that any asylum seeker who arrives by boat “will have no chance of being settled in Australia as a refugee”. With the avowed aim of ruining the people smugglers’ business model, Australia started to send asylum seekers to a holding camp in Papua New Guinea. If their applications were upheld they could seek residency in Papua New Guinea. They never got to set foot on Australian soil.

The result is that the most recent update of Australia’s Operation Sovereign Borders runs as follows: “No illegal maritime arrivals” last month, the return to Sri Lanka of “five people who did not engage Australia’s protection obligations”, voluntary repatriation of one refugee of unspecified nationality and of 22 Sri Lankans, the deportation of three Sri Lankans and the conviction of one people smuggler. These are small numbers and a clear indication that Australia may have cracked its problem.

Can the EU do the same? Probably not. There is no guarantee it can be as tough, for so long, over a legally questionable deal. Australia was called out in March 2015 by the United Nations Special Rapporteur on Torture for breaching the Convention on Torture, but Operation Sovereign Borders continues.

There is little certainty the logistically complex agreement with Turkey can even be implemented. Any number of things could go wrong. At least 4,000 personnel are required in Greece immediately, to assess asylum claims and return failed applicants to Turkey but the first trickle of helpers will start arriving from other EU countries only from next week. Until then, the backlog of asylum applicants in Greece will grow.

Turkey may refuse to cooperate if its president Recep Tayyip Erdogan decides to take offence at some European error of omission or commission. Or Ankara may lose interest if the EU is unable to deliver the goodies it has promised — visa-free travel for Turkish citizens, a total of six billion euros to help pay for housing refugees and renewed seriousness about Turkey’s long-stalled talks on joining the union.

Clearly, Turkey is not Papua New Guinea, for all that Europe wants it to play that role.