Putin, the strongman in Syria 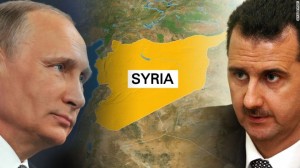 Donald Trump’s new ad shows Russian President Vladimir Putin laughing while Hillary Clinton barks like a dog. It also lumps Putin with the Islamic State (ISIS) as a threat to the United States and the world. Just a couple of frames earlier, Putin is seen throwing a judo opponent.

Forget the Clinton bit for a moment. Forget the Kremlin spokesman’s disapproval of the negative way that Russia is repeatedly featured in the United States’ election season. Shouldn’t Putin at least be pleased about being portrayed as a strongman, considering his claims that Russia won a remarkable victory in Syria and that it should be given credit for a ceasefire and the start of peace talks?

Did it? Did Russian intervention in September — and the abrupt March 14th announcement of a pullout — concentrate minds all around the table at the UN talks on Syria? More particularly, has it changed the private calculations and the public comportment of Syrian President Bashar Assad?

Yes, in the sense that Putin delivered for Assad’s embattled regime. Russian air strikes helped to partially rehabilitate it. The regime and affiliated militias have been enabled to recapture more than 400 “populated areas” and about roughly 10,000 sq. km of territory.

Yes, too, because Putin cannily declared — at a crucial moment in the Geneva peace talks — that he was partially pulling back from the Syrian adventure. It was just enough to make nonsense of Assad’s claim that he aimed to retake the whole of the country and was profoundly uninterested in the UN plan to establish “credible, inclusive and non-sectarian governance” within six months, set a schedule for drafting a new constitution, to be followed by UN-monitored elections.

What a difference a week — and the loss of Putin’s airpower — makes. In the newest round of talks, after Russia’s surprise announcement of a withdrawal, Syria’s UN Ambassador Bashar Ja’afari has been forced at least to acknowledge the UN negotiating team’s laundry list of demands. Though UN Special Envoy Staffan de Mistura has been unable so far to get Ja’afari to address what he calls “the mother of all issues”, political transition in Syria, there is a growing sense that it may be only a matter of time.

It has to be said that this is mostly the result of Putin’s indication that Russian support has its limits.

Aron Lund of the Carnegie Endowment for International Peace recently pointed out that Putin had probably correctly judged that “a complete nationwide military victory for Assad remains unlikely” and that a peace deal on Assad’s terms was equally improbable. And Randa Slim of the Middle East Institute has said that Moscow’s announcement of a pullout, which coincided with the start of the Geneva talks, may have been a nudge to Assad to get talking and get serious about doing a peace deal.

Clearly, Putin had no intention of pushing Russian forces into a lengthy, expensive and dangerous overstretch. He was evidently keen to send a message — he would not help keep Assad in power at all costs.

This has changed the dynamic of the UN talks, which sputtered when they began off the back of a fragile truce on February 22nd. A peace plan is not in prospect right now — it is too soon for that — but for the first time in the war, there is at least a vague sense of what a settlement might look like. There is talk of a loose federal structure with an Alawite enclave from Latakia to Damascus, territory for the Kurds and the rest of Syria for the Sunnis once they are helped to purge Raqqa and the east of the country of ISIS.

Can this happen? Yes, if Russia were seen to be willing to work in a constructive way with the United States and other countries to get to the next stage of the tentative process towards a post-conflict Syria.

Unfortunately, such strength in solidarity may not come naturally to Putin.