By pushing Muslims to the margins, Cruz & Trump would make US like Europe 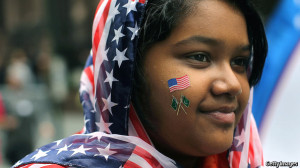 Ted Cruz and Donald Trump want to make the US more like Europe. They want to push Muslims to the margins and make it harder for them to integrate.

Consider what the two Republican loonies are proposing in the aftermath of the Brussels attacks.

Mr Cruz wants to “patrol and secure” Muslim neighborhoods in America because that’s what’s required in “a neighbourhood where there is gang activity”.

Which gangs and which neighborhoods could he possibly mean? The wealthy suburbs of Chicago, where American Muslim doctors have their palatial residences? Remember that immigrant American Muslims are “slightly more affluent and better educated than native-born Muslims,” according to the book Being Muslim in America, which is published by the US government’s Bureau of International Information Programs.

Remember too that 24 per cent of all Muslims in America and 29 per cent of immigrant Muslims have college degrees compared to 25 per cent for the US general population. “Forty-one percent of all Muslim Americans and 45 percent of immigrant Muslims report annual household income levels of $50,000 or higher. This compares to the national average of 44 percent,” says Being Muslim in America.

So which neighborhoods and gangs could Mr Cruz mean? The ethnic pockets where Somalis, Bangladeshis, Bosnian and Pakistanis live just because those people happen to be Muslim? These are not ghettos and nothing like Molenbeek, the Brussels neighborhood, where conditions are ripe for discontented Muslim youths to turn to radicalism. Molenbeek has long had a reputation for lawlessness, with high levels of petty crime – muggings, drug dealing and burglaries. Its new prominence as a haven for jihad-minded men is hardly a surprise.

Perhaps Mr Cruz is imagining the same sort of situation in Muslim-dominant areas in the US? Which ones? Perhaps he means some Somali gang or the other in Minneapolis? I don’t know of any, but they must surely exist. But to describe them as ‘Muslim gangs’ would be like calling Hispanic gangs in Los Angeles ‘Catholic anti-nationals’.

In any case, was there “gang activity” in mass shooter Syed Rizwan Farook’s neighbourhood in San Bernardino, CA before he set out with his equally disturbed wife to murder innocent people? What patrol could have picked up the increasingly deranged thoughts of an American-born-and-bred man who worked in the local country office and just happened to be Muslim?

Donald Trump doesn’t want Mr Cruz’s patrols (though he would support them “100 per cent). He wants to keep Muslims out of America altogether because of the “hatred” they feel.

This is mad, bad and dangerous talk. Dangerous because it will excite Islamophobes and freelance agents of patriotism who believe that “homeland security” equates with being anti-Muslim.

It is profoundly unfair to demonise America’s Muslims. A 2011 Pew Research Centre poll found that the vast majority of wanted to “adopt American customs”. Only 20 per cent of those surveyed said they would prefer to “be distinct”. Half of the respondents said that many of their friends were non-Muslim and almost 80 per cent rated their community as an “excellent” or “good” place to live.

In Europe, Muslims or coloured people generally would find it hard to say exactly the same and with quite so much enthusiasm. This, because Europe, unlike America, has not emerged from the melting-pot and visually different “foreigners” can remain separate for generations.

The UK, France, Belgium and other European countries struggle to integrate Muslims. Belgium has a particularly hard task because it has done so little to tie in its second-generation Muslim youths. The unemployment rate for Belgians of North and sub-Saharan African descent is between 40 and 50 per cent. The Belgian establishment remains totally unrepresentative of the demographic change that has already occurred. The police is a case in point. Last year, the BBC reported that of Antwerp’s 2,600 police officers, only 22 are non-white.

So far, America has been very different in its treatment of – and response from – its Muslim community, which is estimated at anywhere between two and seven million (more likely the latter). This is, as President Obama pointed out on Wednesday, in a rebuke to Ted Cruz and Donald Trump, part of what keeps America safe.

Making it legitimate to think (and act) hatefully towards Muslims in America would do nothing more than marginalise them. No one would be any the safer. Not the Muslim community. Not America.