Refugees from Germany more grateful than the ones flowing in, eg the Dhnies 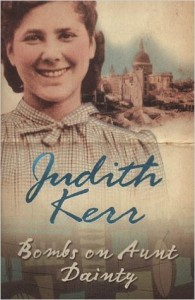 Judith Kerr’s ‘Bombs on Aunty Dainty’ is a remarkable account of what it means to be a refugee – one, who is grateful for sanctuary rather than resentful of the host’s niggardliness.

I thought of that when I was listening to Episode 18 of BBC journalist Manveen Rana’s long-running story of a Syrian family that headed for Europe in search of a better life. Click here for the link. 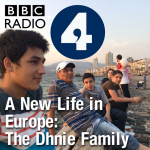 When the Dhnie family was given a new home by the German government along with a cheque for 1,300 euros a month, it expressed disappointment that it was small (just one room for six people) and bathrooms were shared.

And then I remembered Kerr’s wonderful trilogy – When Hitler Stole Pink Rabbit, Bombs on Aunt Dainty and A Small Person Far Away – in which a rather well-off and intellectual Jewish family flees the rise of Hitler (via Switzerland and France) to England. The first book describes the journey that takes them to London.

The second chronicles the family’s lives as refugees in damp London.

The young child who left her elegant and comfortable Berlin home (and her beloved pink rabbit) becomes an adolescent cramped in a room with the rest of her family. They have little money, privacy or prospects. They are not so lucky as the Dhnie family (above), which left Syria, spent two years in Jordan, then travelled to Europe and were welcomed by the Germans (albeit with a small one-room flat and shared bathrooms.)

The Jewish refugee family in Kerr’s trilogy, modeled on her own family and their story, did not live at a time when the Refugee Convention existed. They had to provide for themselves – food, accommodation, healthcare, clothes. Anna, the young protagonist works overtime to develop as an artist even as she does secretarial work to earn some money.

At one point, Anna is sad about the way her parents’ cultured comfortable lives in Germany changed to one of hardship in a strange country. But her father, a well-known Jewish writer and commentator in Germany, says:

“The chief point about these last, admittedly wretched years……is that it is infinitely better to be alive that dead. Another is that if I had not lived through them I would never have known what it felt like……..To be poor, even desperate, in a cold, foggy country where the natives, though friendly, gargle some kind of Anglo-Saxon dialect…..I’m a writer,…A writer has to know….”

It is better to be alive than dead.