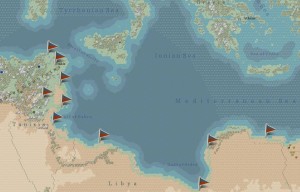 It’s good to know that Fayez Al Sarraj, prime minister of Libya’s UN-backed unity government, has managed to get out and about a bit, making a public appearance at a mosque in Tripoli on Friday. It’s a slight advance on the news from just a few days ago, when Mr Al Sarraj  finally managed to make it to the capital itself, secretly by sea from the Tunisian port of Sfax. That act of reckless bravado brought to mind Pablo Neruda’s poem ‘The Wide Ocean’.

Neruda, a Chilean diplomat-poet would have understood, of course, why Mr Al Sarraj and six members of his “council” needed to get to Tripoli. And why they had to do it this way.

The international community is desperate that the so-called unity government, which was formed under a UN-mediated peace deal late last year, is seen to take charge. But it’s been months and there’s no sign that Libya’s two warring governments want to do a deal.

More about that in a minute but first, Neruda’s ‘The Wide Ocean’:

“Ocean, if you were to give, a measure, a ferment, a fruit

of your gifts and destructions, into my hand,

I would choose your far-off repose, your contour of steel,

your vigilant spaces of air and darkness,

and the power of your white tongue,

that shatters and overthrows columns,

breaking them down to your proper purity.”

Those “vigilant spaces of air and darkness”. Clearly that is what helped the so-called unity government sneak into Tripoli. They had to travel 12 hours from Sfax by sea, without advance notice of course, in order just to be able to land.

The cloak and dagger was necessary because earlier attempts to fly into Tripoli had been prevented by the General National Council, which governs (if that’s what its misrule can be called) from there. Apparently, it was able to close the airspace in time to prevent Mr Al Sarraj’s plane from landing.

Mr Al Sarraj has set up office at a naval base. A security plan had apparently been negotiated in advance, Al Jazeera has reported, with police and military forces in Tripoli, and with some armed groups.

The UN’s Libya envoy Martin Kobler meanwhile urged all public bodies to facilitate a peaceful and orderly handover of power and for “the Libyan people to extend to the Presidency Council and the Government of National Accord their full support and cooperation”.

What does that mean?

It’s a bit of a mouthful and the only national accord that Mr Al Sarraj can be truly said to represent is the one among capitals outside Libya.

It was bad enough when Libya was beset by two rival governments – the internationally backed one in Tobruk in the east and the General National Council in Tripoli – and had also to contend with ISIL’s growing footprint. Now that poor wracked country has to deal with a third wannabe government.